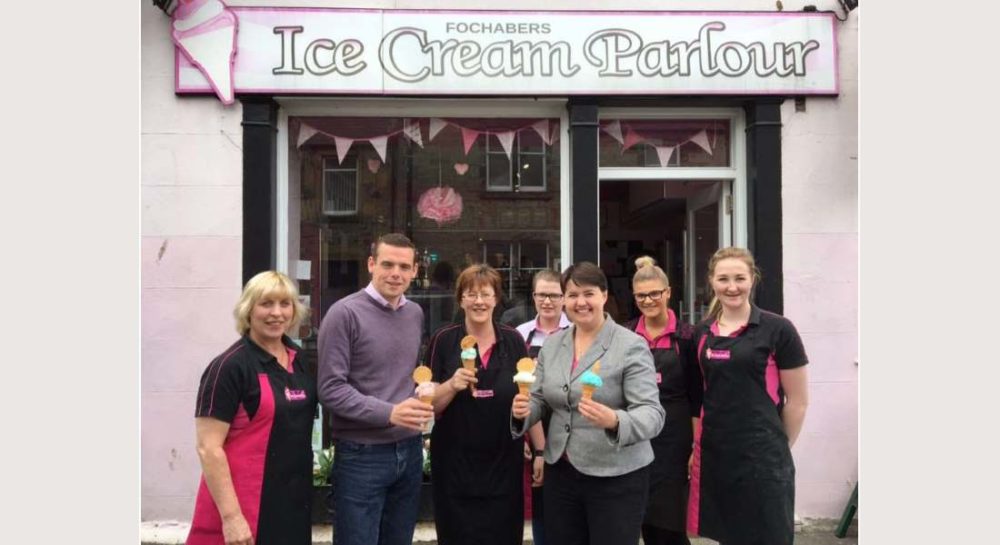 THE OWNER OF A FOCHABERS Ice Cream parlour that is popular throughout the region had to contact police following a general election visit by Ruth Davidson.

In one of the more unsavoury incidents of the recent election campaign, the Fochabers business was targeted after the visit last week from the Scottish Conservative party leader.

Owner Sheila Gray said that following the visit, during which Ms Davidson called in at the ice cream parlour as part of a whistle-stop tour of Moray, online threats were made that gave her cause to fear for the safety of her staff.

A call was made to boycott the business which has in the past been visited and praised by politicians of all parties – including Moray’s MSP Richard Lochhead who cites the shop as one of his favourites. However, it was an online threat to cause damage to the shop that most worried Ms Gray, who told a newspaper: “It scared me.

“I was due to be out of the shop for a day and had to leave some of the younger members of staff on their own – I had to get in extra staff in case there was some nonsense while I was away.”

Ms Gray added that she did not care about politics and all were welcome in the shop. A complaint was made to police who have said they have offered advice to the business.

Last night local Conservative councillor Marc Macrae, who also attended the Ruth Davidson visit, said he could understand the concerns of anyone being threatened online.

He said: “It is a real shame that people should react in this manner against a small local business that did nothing more than welcome a politician who is interested in their success – as they have done in the past and I would hope will always do in the future.

“During the campaign Nicola Sturgeon called at another business in Moray that through the hard work of a few individuals has become a success, the Aroma Café at Covesea – it is part and parcel of election campaigns and no business owner should ever feel threatened in this manner.”

The shop did receive a level of support from local people on their Facebook page – including a comment from former Moray councillor Linda Gorn, who said: “Why do people feel the need to have a go at a local business who post a picture on Facebook – it’s election time for goodness sake.

“No need to be so horrible with comments towards a hard working business and an award winning one at that. If it had been the First Minister visiting many of the comments wouldn’t have been so negative.”