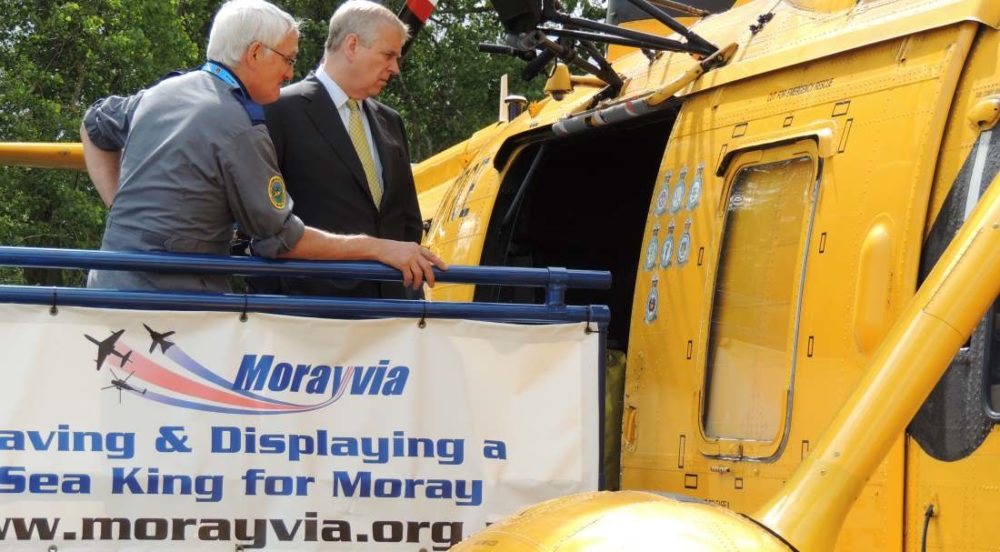 THE DUKE OF YORK relived a vital period in his own military career when he visited the Morayvia SciTech centre in Kinloss on Monday.

A former Sea King pilot’s visit came almost exactly 35 years after the battle of Bluff Cove on the Falkland Islands, when he was co-pilot of a Sea King involved in the rescue operation following the bombing of troop transport Sir Galahad.

The Duke undertook several visits during his stay in Moray including his former school, Gordonstoun – but it was boarding a Sea King for the first time in many years that perhaps invoked the greatest memories.

He was given a tour of the visitor centre at Kinloss and briefed on the organisation’s history and future plans before inspecting the centre’s pride and joy, a former SAR Sea King. The former aviator was, however, suitably impressed by Moravia’s fast-growing collection including the most recent, a Jaguar GR3. Met by Morayvia volunteers, local cub scouts, and members of the Boys Brigade, HRH also met Jo Robinson, Regional Director for VisitScotland, alongside local businessmen and Morayvia supporters Charlie Milne from Regency Vauxhall and Richard Milne from Limehillock Quarries, who all advised HRH on the input they have had to Morayvia’s recent and future growth plans.

Before departing the Duke was presented with a special replica model of the Sea King Helicopter which he flew, made specifically for him by Morayvia Director and former Search and Rescue winchman, Bob Poutney.

Morayvia Chairman Mark Mair said: “To have a member of the Royal Family and former Sea King crew member come and give our centre the Royal Seal of approval is really a great acknowledgement of the efforts of all our volunteers and local business supporters.

“It has been a wonderful privilege to have HRH visit us today, and we also should thank Lord Lieutenant of Moray, Grenville Johnson, for his ongoing support in joining many people in the background that has helped Morayvia become a reality.”