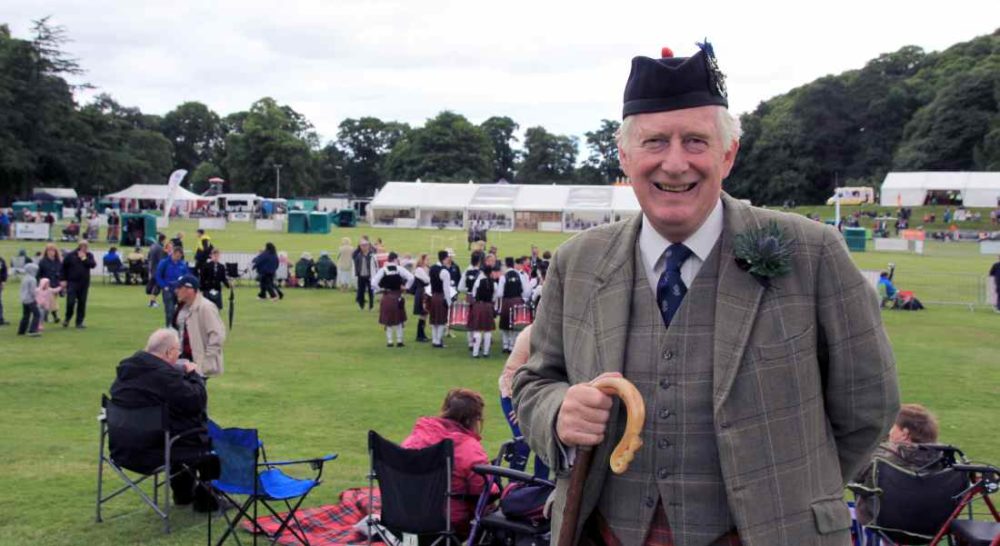 A MARVELLOUS DAY – that was the verdict on not only Saturday’s ‘Piping At Forres’ event but the previous four as well, with a glowing testimony provided by the Chieftain this year, Major General Seymour Monro.

insideMoray caught up with him at the start of events in Grant Park, in the midst of around 100 pipe bands putting last-minute touches to what for them is quite simply the most enjoyable and important day on the calendar.

“I’m feeling huge enjoyment – it is a marvellous day,” Maj Gen Monro said of the experience as the figurative head of the championships, adding: “I’ve been to the last four events here and it is the most fantastic pipe band championship.

“Forres creates the most tremendous atmosphere – it is an amazing arena. I can remember it from the age of one – I used to come and play in the Grant Park and I can remember rolling chocolate eggs down the hills on Easter Day.

“So it is the most fantastic natural arena with Forres surrounding, Cluny Hill, the Nelson Tower – this provides a magnificent setting.”

Admitting himself to have been a “failed piper”, Seymour has nevertheless a keen ear for the pipes and drums: “I do know a little bit about piping and I’ve been privileged as a Highland soldier to listen to the most outstanding military pipe band, the Queens Own Highlanders band, from a young age and able to appreciate and to learn what is really good piping and drumming.

“That is what the championships are about, to get people up to standard, to encourage people to play the pipes in a band and then to compete in this fantastic competition. Yes, there will be winners who get prizes but everyone is actually a winner today because it is such a tremendous day for everyone.”

Joining in our discussion was Allan James, the chairman of Forres Events Ltd who for the last five championships have been organisers and hosts.

Allan admitted that there was an economic benefit to the local community – but Piping At Forres had been much more important than pure money: “The championships certainly help the local economy and is great for the town because it provides a day in the year when everyone can enjoy Grant Park, which is a fantastic facility for the bands as well.

“Rarely do they get to park their buses very close to the arena. For Forres there is of course quite a lot of business available because of the number of visitors that come in for Piping At Forres, and it also promotes Forres on a national and even international scale. For the town this is recognised as the day of the year.”

One of the real benefits gained not only for Forres but all of Moray is the national and international exposure of the region. It has been said many times by Tourism experts that events such as this are being reflected in increased visitors numbers each year.

Allan said: “Of course many of our visitors will return again because this is a lovely area – all of Moray, and Forres in particular, is the place to be.

“But all this comes from a tremendous amount of work – here we are at the end of June when we will have a break for a month, but then we start having our meetings and look at what we need to do for the next championship.

“There are many things that might remain the same, but we constantly try to add in additional attractions to the event and that’s where we spend a lot of time. Some of our volunteers have been on the go pretty much daily for the last month – all to peak on the day.”

There were winners and many more ‘losers’ from the competition on Saturday, but we can perhaps all be certain of one fact – Forres and the wider Moray have proven to be the biggest winners of them all.