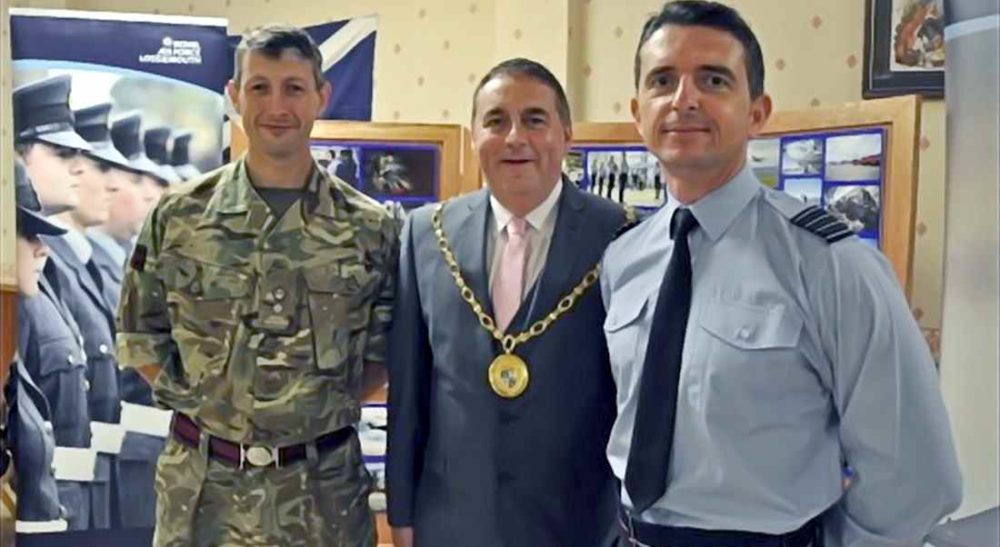 MORAY AND HIGHLAND COUNCILS have ‘joined forces’ in their support of military personnel throughout the north of Scotland.

The councils have been jointly awarded funding from the MoD’s Military Covenant Fund to create a Liaison Officer post.

When the role is taken its holder will work with both councils and the military bases at Lossiemouth, Kinloss and Fort George, providing information, guidance and support to ensure military families have full access to local services.

The post holder, expected to be appointed later this summer, will also work closely with a range of agencies that already support the Armed Forces Covenant in the Highland and Moray regions.

Convener of Moray Council, James Allan, announced the initiative at a briefing session for local councillors with base commanders from RAF Lossiemouth and Kinloss Barracks.

Councillor Allan said: “This post is about us as a community giving something back to our armed forces. It will help military families access all the services councils can provide, and given the recently announced expansion of RAF Lossiemouth many more personnel will be in need of these.”

“Working jointly with Moray Council will see a sensible, joined-up approach to ensure better delivery of services to our Armed Forces communities.”

The Armed Forces Covenant sets out the relationship between the public, the government and the armed forces, citing the moral obligation to current and former members of the armed forces and their families, and it sets out how they should expect to be treated. Moray and Highland councils signed up the Armed Forces Covenant some years ago to help cement relationships between the organisations.

The Covenant Fund has £10 million each year to support the Armed Forces Covenant by funding projects which address specific priorities.

Moray has previously been awarded £250,000 from the fund towards the Covesea Lighthouse Community Company project, and £65,000 to develop the Skillforce leadership skills project in primary schools.