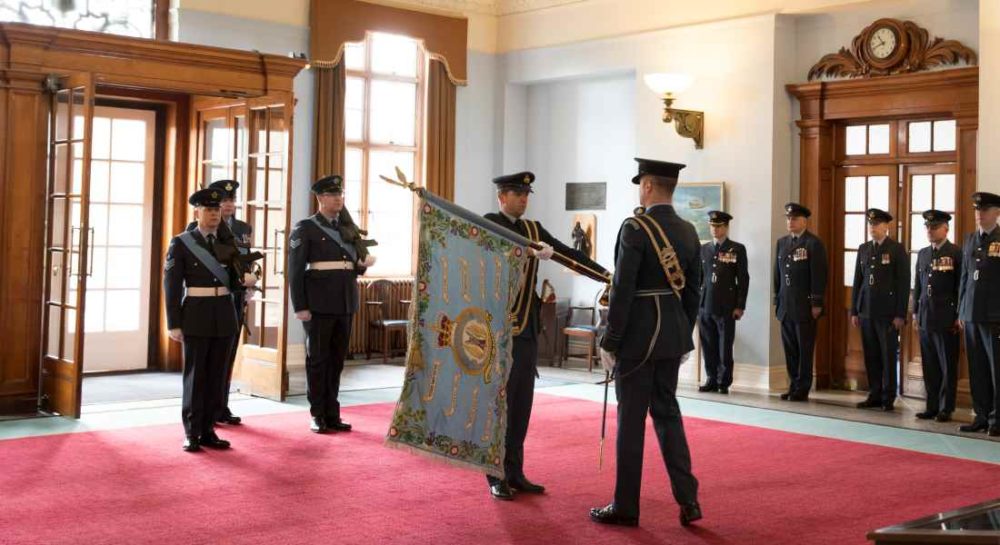 THE LAST ACT in the disbandment of RAF Lossiemouth’s last Tornado squadron has taken place at the RAF College, RAF Cranwell.

XV(R) Squadron departed at the end of March with a tribute pass over the Moray base before the last members of the squadron were greeted by family and friends on the ground.

Recently, a small group of personnel from the squadron took on the job of transporting the Squadron Standard to Cranwell so that it might be ‘laid up’ in the rotunda of the College Hall Officers’ Mess.

The short ceremony marked the final official act of disbandment for the squadron, with the standard handed over accompanied by the words: “I give unto your safe keeping The Squadron Standard of No XV(Reserve) Squadron Royal Air Force. I charge you to guard and defend it with all honour as befits the symbol of our unity and common loyalty to Her Majesty the Queen.” Wing Commander Paul Froome, the last OC of XV(R), led a small number of personnel at the ceremony. He said: “It was an honour and a privilege to lodge the XV Squadron Standard in the Royal Air Force College, and a fitting end to the disbandment activity.

“The Standard joins those of other illustrious squadrons and I hope that in the near future it will be marched-out of College Hall and paraded again with pride and dignity.”

The standard will now remain at Cranwell until XV Squadron is required to be reformed by the RAF.

Although originally designed to mark a rallying point for troops during battles involving hundreds if not thousands of men, military standards still have emotional importance for personnel who serve in the Armed Forces.

Whilst in themselves not massively expensive to produce standards have such significance to the members of regiments and squadrons that their value as historic items may reach the tens of thousands of pounds.