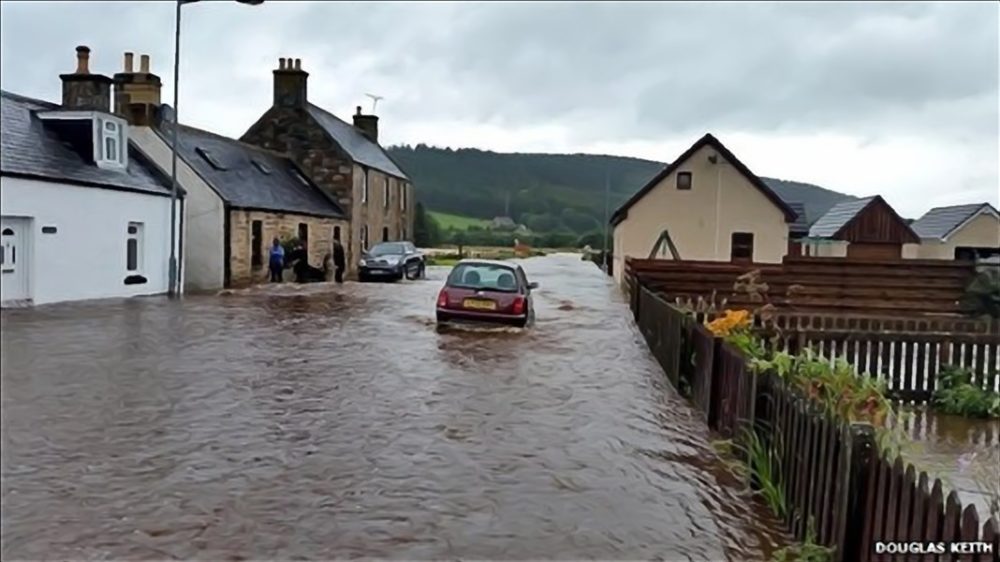 MORAY COMMUNITIES ARE on flood alert today after steady rainfall fell over the region throughout Tuesday – and continues this morning.

The River Lossie is reported to have broken its banks in Dallas, where around £600,000 worth of damage to homes was caused in 2014.

While the local flood alleviation scheme is nearing completion it is not yet ready – and this morning householders are once again nervously watching the rising water. Local resident Angela Naylor told insideMoray this morning that the village was flooded at either end but as yet the water had not breached homes.

She said: “We have been up since 3 or 4am – fingers crossed that the fields can cope with the volume of water coming through.”

The Scottish Environment Protection Agency (SEPA) issued a flood alert in Moray urging residents to “remain vigilant”: “Heavy and persistent rainfall has been forecast for the north east of Scotland, which will lead to a risk of flooding from rivers as of late Tuesday evening into Wednesday morning.

“Possible flooding impacts may include flooding of low-lying land and roads. Wet road surfaces and ponding of water may lead to difficult driving conditions, travel disruption and longer journey times.”

Motorists are reporting a lot of surface water along the A96 through Moray, while in Elgin there are also localised reports with drivers being urged to take extra care this morning.

Forecasters say that the rain will persist throughout Moray this morning until after midday, when the clouds are expected to clear making way for early evening sunshine.