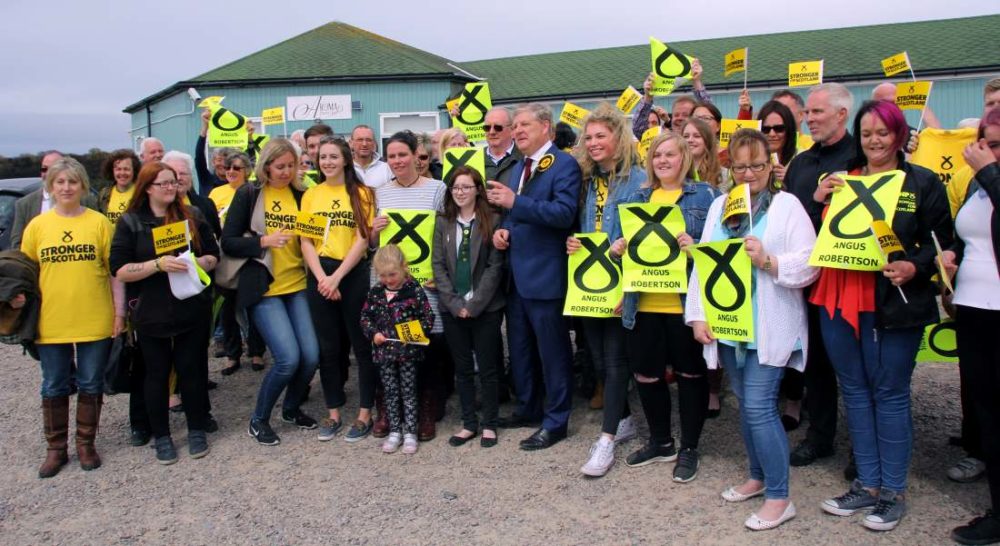 ANGUS ROBERTSON IS hitting back at predictions of a shock defeat in Thursday’s general election vote after his main opponent was bolstered by a visit from Scottish Tory leader Ruth Davidson.

The visit in support of Douglas Ross on Friday coincided with the publication of a poll that predicted Moray would fall to the Conservatives.

However, the poll – a sample of 1000 voters throughout Scotland rather than specific to Moray – was dismissed by Mr Robertson’s supporters who pointed out that it had been conducted two weeks ago.

During her whistle-stop tour on Friday, Ms Davidson hit out at the SNP deputy leader, saying that he was spending as much time at TV studios in London and Edinburgh while Ross was canvassing and talking to local people.

That was another claim dismissed by the SNP camp, who pointed out that as a sitting MSP who did not give up that post to contest the Westminster seat, Mr Ross was dealing with Scottish Government issues as much as he was canvassing.

Mr Robertson, however, sought to highlight other jobs undertaken by his Conservative opponent than his Holyrood post: “As the SNP’s candidate I am committed to being a full-time representative for the people and communities of Moray rather than a part-time Tory cheerleader who has already stated he will continue to be a professional referee.

“In Moray this election is a clear two-horse race between the SNP and Tories, who have made it clear they want to continue with austerity budgets that are causing massive problems for vital public services.”

The SNP campaign manager Derek Mackay added: “This poll was taken over two weeks ago – but like all other polls, it shows that only a vote for the SNP can keep the Tories out. Labour can’t win the election in Scotland – and a vote for them just risks letting a Tory MP in the back door.

“Now, more than ever, it is vital to have strong SNP voices standing up for Scotland at Westminster.”

Canvassing from all parties resumes today follow suspension on Sunday in the wake of the terrorist attack on London.

However, a visit today by Defence Secretary Michael Fallon to Forres in support of Douglas Ross has been cancelled as he is involved with talks over security.

Mr Ross said: “After the shocking events in London it was understandable that the Defence Secretary has to remain down there. These attacks remind us how fragile life is – and underline the bravery of all our emergency services and armed forces.”

Angus Robertson had earlier said his heart went out to the victims and their families of the London attack, which were recognised at a local SNP meeting on Sunday which began with a minutes silence.