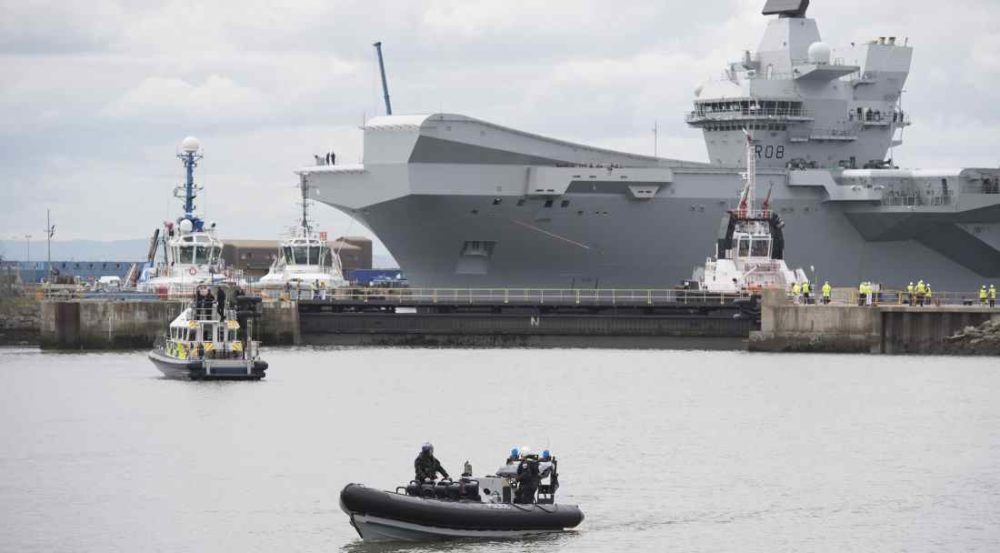 DOLPHIN WATCHERS ALONG the Moray coast could be set for a sight over the next six weeks that they may not need binoculars to view.

While rare whale sightings have become the thing for coast watchers, there is now a much larger target – the nation’s new flagship, the aircraft carrier HMS Queen Elizabeth.

It has been described as a ‘historic moment’ when the massive ship set sail from Rosyth for her first sea trials – and these are taking place off the north east coast and so very likely at some point in the Moray Firth itself.

Moray has already had a taste of some of the aircraft trying out their new home, several Merlin helicopters from RNAS Culdrose having exercised at RAF Lossiemouth earlier this year, it is believed in preparation for the new carriers ultimate arrival.

Celebrating the departure of HMS Queen Elizabeth yesterday was defence secretary Sir Michael Fallon, who said: “This is a historic moment for the UK as our new aircraft carrier takes to sea for the very first time.

“This floating fortress is by far the most powerful ship ever built in Britain that will enable us to tackle multiple and changing threats across the globe.

“HMS Queen Elizabeth is an enduring example of British imagination, ingenuity, invention that will help keep us safe for decades to come. She is built by the best, crewed by the best and will deliver for Britain.

“For the next fifty years she will deploy around the world, demonstrating British power and our commitment to confronting the emerging challenges from a dangerous world. The whole country can be proud of this national achievement.” Following her initial trials off the north east coast, which are designed to test all the fundamentals of the new ship, she will return to Rosyth for further testing before heading back to sea for another series of tests. She will then set sail for the Portsmouth Naval Base to be formally handed over to the Royal Navy later this year.

Admiral Sir Philip Jones First Sea Lord and Chief of Naval Staff said:“This is a hugely significant moment for the Royal Navy, for all our Armed Forces and for our island nation.

“Once in service HMS Queen Elizabeth will be the largest aircraft carrier in the world outside the United States, and the first designed from the outset to operate a fifth generation aircraft.

“Already this ship represents the best of the UK’s industrial and engineering expertise, and once in service she will symbolise our military power and authority in the world for decades to come. There is still much work to do between now and then, but be in no doubt: a new era of British maritime power is about to begin.”

The UK’s second carrier, HMS Prince of Wales, is now undergoing outfitting. Both carriers will be equipped with F35B Lightning aircraft alongside a variety of helicopters including the Chinook.