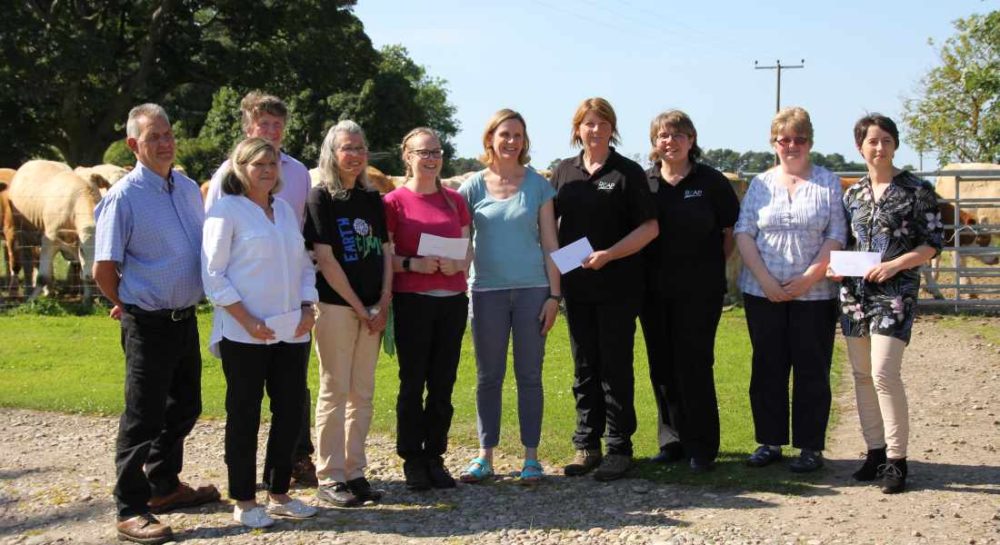 FOUR MORAY CHARITIES and several more local groups have benefitted to the tune of £10,000 following a highly successful open day at the Pitgaveny Farm.

The bi-annual event was held in May and has grown quickly into becoming one of the most popular events in Moray.

Thousands again flocked to the estate just outside Elgin and helped to raise funds for the three main charities being backed at the event this year – EarthTime, Quarriers and REAP, as well as Macmillan Cancer’s centre at The Oaks in Elgin.

Representatives from each of the charities returned to the farm yesterday to receive their thanks and cheques from Rebecca Russell from Pitgaveny Estates, who said: “We had a great open day this year and at that we managed to raise over £10,000 for our nominated charities and also in support of the volunteer groups who work so hard at the Open Day.

“We are all delighted at how the day went but it did make such a difference that all those different organisations were represented and took what was a nice opportunity to promote the charities.

“We had bonfires, kids’ activities, food stalls, mocktails and workshops – all sorts of things that helped make the day a success. I know that many people were able to engage with the groups and talk to them – and that is what the day is really about.” Sandra Taylor works on the Estate and volunteered six years ago to sell some preserves for Macmillan Cancer having lost her husband to cancer a short time before. Since then she has taken charge of the home bakes stall at the open day.

She told insideMORAY: “I was doing our home bake stall with the proceeds as always going to Macmillan Cancer at The Oaks.

“It was the fourth time I’ve organised that – it helps me, I lost my husband almost seven years ago to cancer and so when they first had the open day I asked if I could do a few jams and preserves – and was given the home bake stall.

“Everyone that lives and works on the Pitgaveny Estate contributes – I do some of the baking but it is a team effort from everyone. I’m also grateful to the ladies at the WI in New Elgin who I also asked to provide some of the baking – so was very much a big combined effort.”

Look out in the next few days for insideMORAY features on the three Moray charities who were the main beneficiaries of the open day.