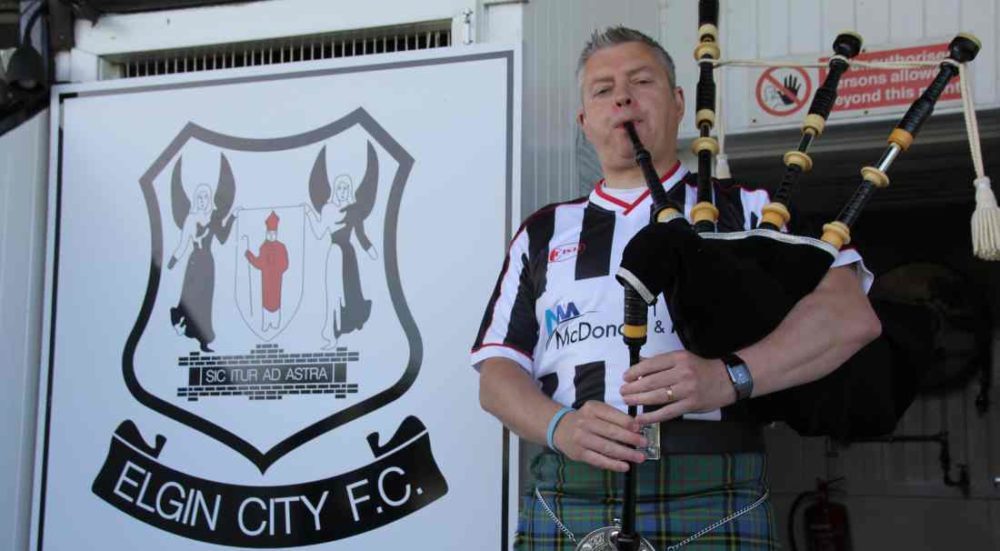 ELGIN CITY’S BOROUGH Briggs stadium was the starting point for the second day in a challenging five-day tour of every SPFL ground in Scotland yesterday [Tuesday].

Greenock and Inverclyde MSP Stuart McMillan had already made his way up the west coast as far as Dingwall for his charity challenge – to play the pipes at ever Scottish league ground.

Stuart is the official Scottish Parliamentary piper and plays at official events for and on behalf of the Parliament. This week he is making good use of the recess to undertake his challenge over five days.

All donations raised will be divided equally for three charities – Cash for Kids, Clydeside Action on Asbestos and the Andy Adams Fund – an Inverclyde firefighter whose life has been irrevocably changed due to an incident he was involved in whilst on duty.

Stuart started the Pipeathon at his local club, Greenock Morton FC and will end at Hampden Park on Friday. He is being supported in his efforts by the Scottish Fire and Rescue service, who have kindly offered to let him stay at various fire stations across Scotland as he undertakes his project. He is also being assisted by Arnold Clark, who have donated a vehicle for the week and McDonald’s have offered to feed him on the week long charity drive.

Moray’s MSP, Richard Lochhead, and Councillor for Elgin City South, Graham Leadbitter, were at Boroughbriggs along with Elgin City’s chairman Graham Tatters to welcome Stuart to Elgin and see him safely on his way.

Stuart said: “I am always willing to do my bit to contribute in any way I can and, as the Scottish Parliament piper and a football fan, I thought that this would be a great way to combine my favourite hobbies to raise money for some very worthy causes.

“I am delighted that all three organisations are happy to receive any financial support that I can help raise and they have supported this undertaking from the get-go.

“I want to thank all the football clubs, the Scottish Fire Rescue Service, Arnold Clark, McDonald’s, EE and Graphics Forge who are all taking part in this initiative, and I would like to encourage as many folk as possible to donate to Pipeathon and support three very worthy causes!”

Donations can be made via www.justgiving.com/crowdfunding/pipeathon2017 while details of the times that Stuart is visiting each football ground can be found online.