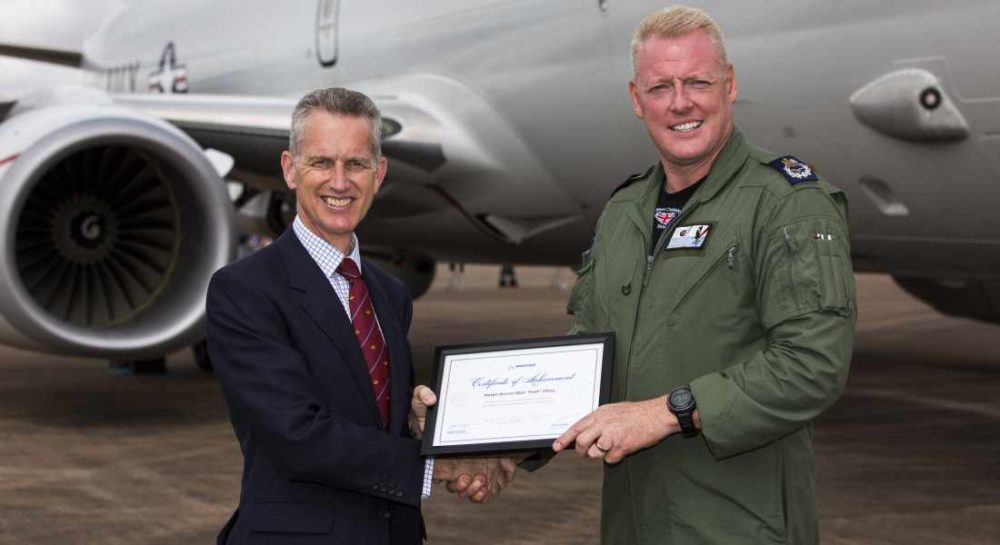 TWO OF THE AIRMEN tasked with helping pave the way for the P-8A Poseidon force to RAF Lossiemouth have been speaking of their pride this week.

Master Aircrew (MACr) Mark Utting and MACr Paul O’Flaherty have been presented with badges marking their 1000 hours’ service on the P-8A by the Chief of Air Staff.

Both are currently stationed at the US Naval Air Station in Jacksonville, Florida where they have been part of the Seedcorn team preparing the RAF for acceptance of the new MPA force by 2020.

After receiving his badge MACr Utting who last week told insideMORAY how much he was looking forward to returning to his home in Hopeman, said: “It’s great to be one of the first UK guys to receive the badge – it really puts a smile on my face.”

MACr O’Flaherty added that he and his colleagues all looked forward to returning to RAF Lossiemouth to establish the new capability.

Both have been based at Jacksonville since 2012 as part of Project Seedcorn. Seedcorn personnel – all of whom have many years’ experience in RAF maritime patrol operations – have been serving on assignments in the USA, Canada, Australia and New Zealand, also helping maintain the UK’s global partnerships with key allies. The UK will invest more than £3billion in the RAF’s new maritime patrol capability over the next decade, which will see the aircraft operate from RAF Lossiemouth in a significant boost to the local economy.

The Chief of the Air Staff, Air Chief Marshal Hillier, said: “Today recognises another milestone on the road to the regeneration of the UK’s maritime patrol capability.

“The dedication shown by the men and women involved in the Seedcorn programme is evident in those here today, who have achieved 1,000 hours on the P-8A Poseidon. Their commitment is what continually drives forward the delivery of our maritime patrol capability.

“I am grateful for the role they are playing in the future defence of the UK, and developing our collaboration with partner nations.”

Seedcorn’s next major stage, in September 2018, will see the first fully-formed RAF crews travel to Jacksonville to train on the aircraft. When fully established, more than 470 RAF personnel and civilian colleagues will support, maintain and operate the aircraft at RAF Lossiemouth.

Last week the Secretary of State for Defence, Sir Michael Fallon, announced that the RAF will reactivate 120 and 201 Squadrons to operate the aircraft.

Following the announcement he said: “Our nine new Poseidon aircraft are part of our plan to monitor and deal with increased threats to our country.

“They can operate at long range without refuelling and have the endurance to carry out high and low-level airborne maritime and overland surveillance for extended periods, helping keep us safe. The P-8A aircraft will allow us to work more closely with our allies, improve our surveillance coverage and will provide value for taxpayers’ money.”