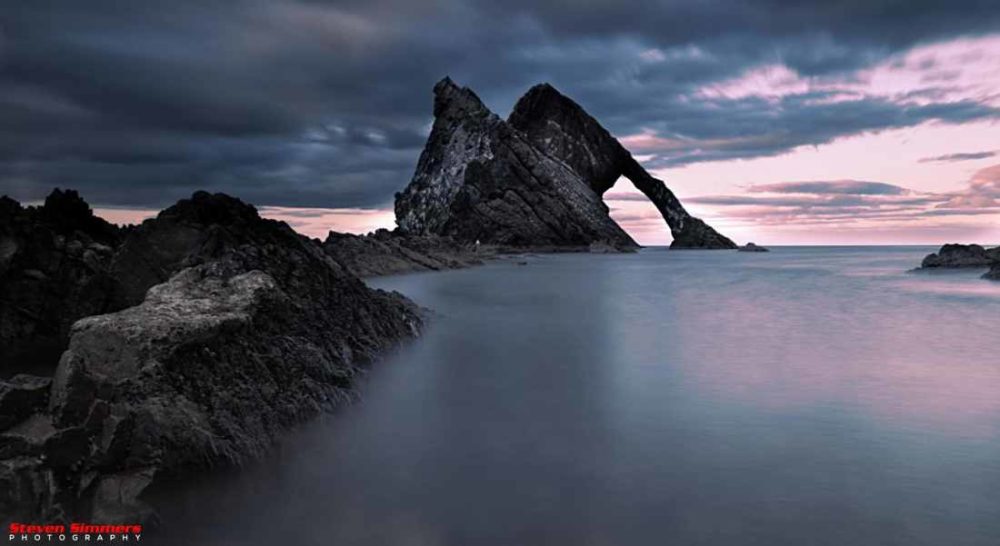 MORAY HAS FEATURED STRONGLY over the years as more people around the world realise that the natural attractions of the region extend well beyond its distilleries.

Now according to a report in the online technology magazine ARS Technica UK one of the most alluring sights in Moray could be lost to the ravages of the sea.

In a feature looking back at the heavy storms that destroyed the world-famous Azure Window in Malta earlier this year, the magazine has said that a similar fate awaits similar coastal rock structures around the UK.

These include Orkney’s Old Man of Hoy, Dorset’s Durdle Door and Chesil Beach, the Green Bridge of Wales in Pembrokeshire – and Moray’s Bow Fiddle Rock at Portknockie.

The article points out the danger being faced by the Bow Fiddle from the ravages of the North Sea – and cites several examples were coastal erosion has put an end to such sites: “The transient nature of cliffs and beaches has been evident in the loss of many beautiful features in the last few decades.

“Arch Rock in Freshwater Bay, on the UK’s Isle of Wight, formed through centuries of coastal erosion, collapsed in 1992, while an enormous section of cliff near Lulworth in Dorset, UK, disappeared without warning in April 2013.

“This loss of a large section of the South West Coast Path saw tens of thousands of tons of chalk disappear into the sea overnight.”

Bow Fiddle Rock has been one of the most photographed features on Moray’s coastline and has been a magnet for coastal treks and adventures.

But, according to the report, it should be considered as being in very real danger: “It is composed of resistant quartzitic sandstone – hard, non-foliated metamorphic rock, which was originally pure quartz sandstone – from the Neoproterozoic age (1,000-541m years ago).

“It forms the coastal cliff backdrop between Cullen and Buckie and lies exposed to the erosional forces of the North Sea.”

The article can be read in full here.