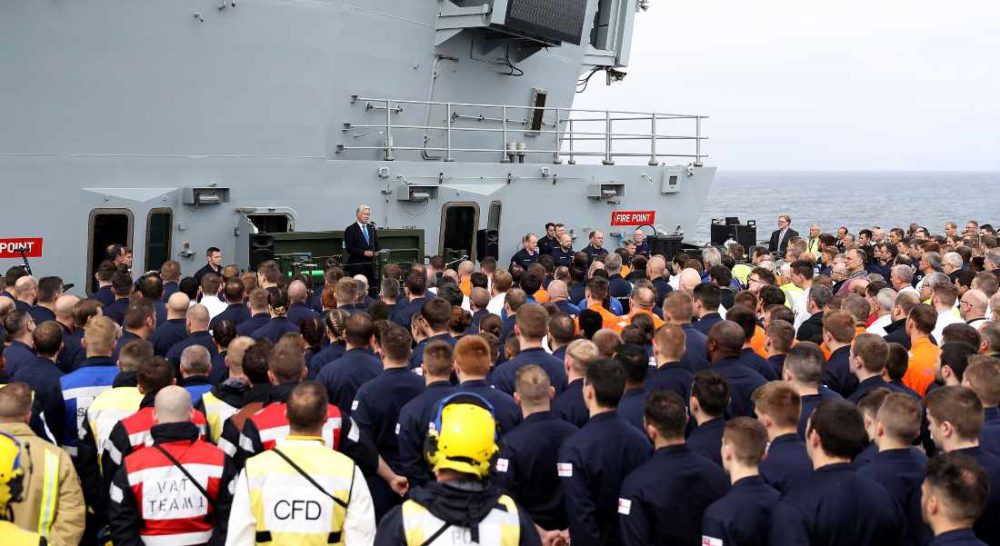 FOLLOWING A WEEK tied up in port at Invergordon there was another opportunity this afternoon for people all along the Moray coast to spot HMS Queen Elizabeth.

The carrier resumed her sea trials off our coast yesterday evening [Sunday] – and welcomed aboard her first VIP guest in the form of defence secretary Sir Michael Fallon, who this morning flew into RAF Lossiemouth before boarding a Royal Navy Merlin and flying to the carrier around 12nm from the Moray coast.

While addressing the Ship’s Company, Sir Michael announced the Britain’s second aircraft carrier, HMS Prince of Wales, will be officially named at a ceremony in Rosyth on 8th September 2017.
The Defence Secretary said: “Our carrier programme is a clear demonstration of British power and commitment to our global standing. “With two aircraft carriers we will have one available at all times, providing a world-class carrier strike capability. They offer a prodigious promise to future generations of our determination to continue fronting up to aggression for years to come.

“The magnificent HMS Queen Elizabeth provides us with power on a scale we have never seen before. Protecting us for the next half a century, she will be a highly versatile and potent force, capable of both humanitarian and disaster relief and high-end warfighting.”

HMS Queen Elizabeth set sail for the first time four weeks ago from Rosyth. Since them most of her time has been spent in the Moray Firth, remaining close to the Merlin squadron that will eventually regard her as home – they are currently working out of RAF Lossiemouth.

A small technical hitch – which the MoD say is the very reason she is undergoing sea trials – resulted in a longer than planned pause at Invergordon.