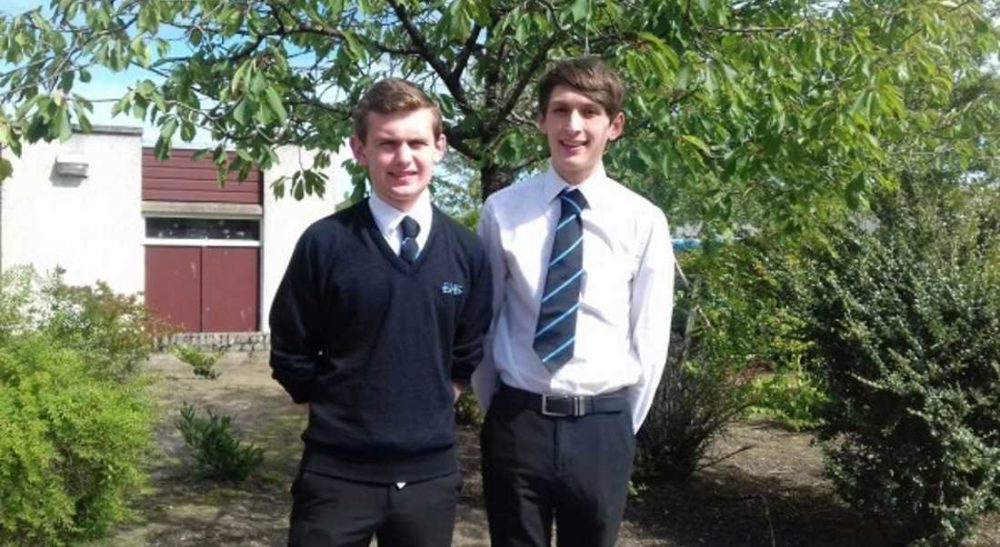 THREE ELGIN HIGH SCHOOL students have been picked out for particular attention following the highly successful examination results announced in Moray on Tuesday.

Ciaran Barron is celebrating three Advanced Higher A’s – bringing a career in medicine a step closer, the 17-year-old having finished his sixth year and preparing for the University of Aberdeen in September.

Ciaran secured outstanding grades in maths, chemistry and biology – and is now set for his ambition of becoming an A&E doctors, inspired by both his grandmothers who were nurses.

Another success on exam day was Ryan Lanigan, a fifth-year pupil at the school was has attained five A’s – in maths, physics, chemistry, history and English. Ryan is less sure of his future and will be remaining at school for another year before he takes that decision.

He said: “I’m going to take Advanced Higher maths and physics. I’m thinking of studying physics at university, so the door’s open to jobs in finance or engineering.”

Ryan’s mum, Lynne, spoke of her pride in her son’s achievements, adding: “I’m so chuffed for him – he’s worked so hard for this. He’s very self-motivated and has just got on with it.”
Completing the trio is fourth year Amber Anderson, who received her results while in Edinburgh with her family.

Amber said: “I’m feeling so great about my results. I got six As at National 5 level.”

Normally, S4 students take up to five National 5 subjects, but Amber and a handful of other students made the brave choice to take on another subject.

Amber added: “It meant I had to forfeit the study time in my timetable and do extra work at home. But I managed to keep a good balance between school and life – I knew when I needed to take a break.”

Headteacher Hugh McCulloch has also voiced his congratulations to the three and all pupils who received results on Tuesday, saying: “I’m so delighted. I know how hard they’ve worked and they’ve all got bright futures ahead of them.”

In total, eighteen students were awarded five A’s at higher level among results that have been declared as ‘excellent’ by Moray Council. That was 12% of those who sat exams – while 36% of those at Elgin Academy and over 33% at both Keith Academy and Forres Academy achieved three or more Highers.

Moray Council’s education director, Laurence Findlay, has thanked teachers for their dedication and commitment to preparing Moray’s young people for their exams, and congratulated students on their achievements.

He said: “We wish them well as they open text messages, e-mails and envelopes this morning and encourage them to contact their school directly if they have any concerns regarding their results and next steps.

“Thanks must also go to our teachers who, despite the ongoing shortages in our schools, make sure that our students are equipped as they can be for their exams, with many going above and beyond to ensure young people get the preparation needed.”

Councillor Tim Eagle, Chair of the Children and Young Peoples’ Services Committee, added: “I’m delighted to hear how well our students have performed in their exams. They’ve been working hard, encouraged by their teachers and family, and the results we’re seeing are proof that their dedication and effort has really paid off.”