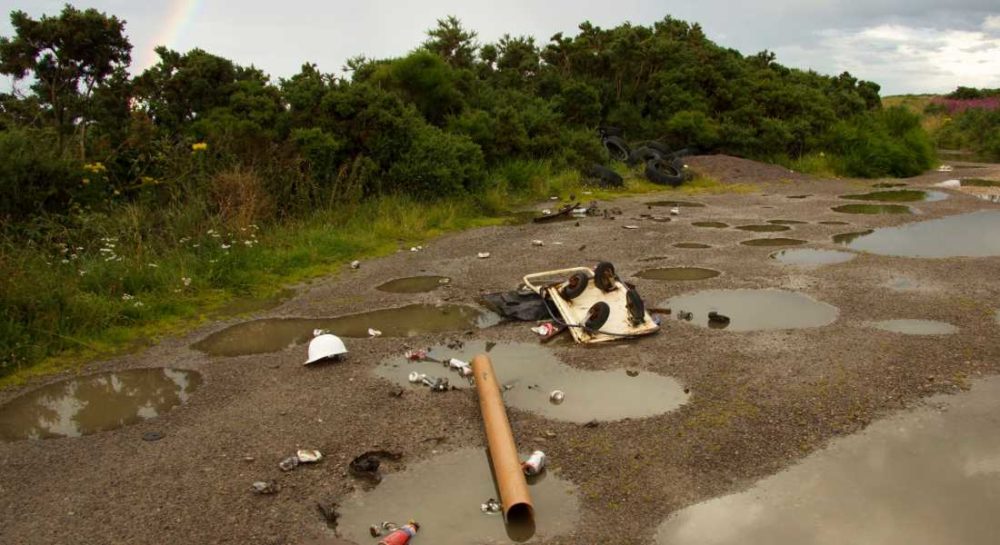 SEVERAL OF MORAY’S most beautiful landscapes are being destroyed in a series of fly-tipping discovered over the last few days that have infuriated local residents.

Moray Council have appealed for members of the public to keep a close lookout for those responsible for dumping rubbish – including over 50 tyres that were left near Lossiemouth’s West Beach.

The local authority have also been dealing with instances where Asbestos was dumped near Spey Bay and close to Duffus.

A council spokesman said that it is an issue that is becoming increasingly common in Moray – and one that is costing local rate payers around £15,000 a year to uplift goods that has included scrap metal, unwanted electrical goods and old vehicle parts – or even old vehicles!

Council convener James Allan, himself a Lossiemouth local, surveyed the dumping in the town this week and commented: “It is awful – Lossiemouth is known as the Jewel of Moray because of its beauty and that is why tourists always come back. “So it is disgusting when people decide to treat it this way – it is simply not acceptable, people should be taking pride in their community not dumping rubbish in it. I know the Council will be trying to track down who did it and deal with them accordingly.”

Moray’s community safety officer, Willie Findlay, appealed for anyone who witnesses fly-tipping to report it to the council with, if possible, details of the vehicles involved – although they should not risk their own safety by attempting to personally intervene.

He said it had become a growing problem throughout Moray with Community Wardens having the power to levy £200 fixed penalties on the culprits: “Over the last few weeks we have had reports of dumping in Lossiemouth, Spey Bay and Duffus. We are taking part in a meeting shortly to discuss how we can address this escalating concern.”

Anyone with information on fly tipping anywhere in Moray can contact Moray Council by Email.