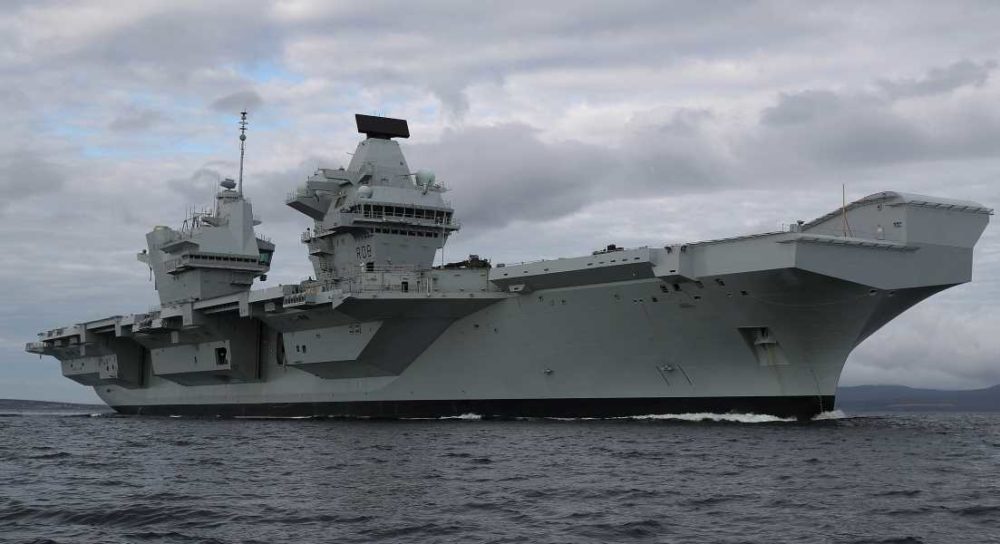 MORAY’S LOVE AFFAIR with HMS Queen Elizabeth looks set to be a long distance one as a defence minister has said the vessel will be at her home port ‘in weeks’.

Since leaving Rosyth the new carrier has been a constant presence, drawing crowds along the shore to catch a glimpse as she has cruised in sight of our coastal towns.

The Moray link to the vessel has been further strengthened by her squadron of Merlin helicopters which have been based at RAF Lossiemouth – and seen constantly ferrying between the base and their seaborne home.

However the sea trials are almost at an end, with the carrier set to head south soon – and her new berth at Portsmouth has been visited by Minister for Defence Procurement, Harriet Balding, this week.

Ms Baldwin said that Portsmouth is now ready to receive HMS Queen Elizabeth and paid tribute to the dredging operation undertaken to ensure the sufficient depth in her new home. The minister also announced new procurement contracts for the Royal Navy worth £3million: “The route is clear for the Navy’s largest and most powerful ship to dock at its home in Portsmouth, but even ships as impressive as our magnificent new aircraft carriers need nuts and bolts to keep them running smoothly.

“This new contract will provide all the supplies our ships and personnel require to be effective on operations. This also brings the previous contract under one deal, delivering improved efficiencies and highlighting how we are being smarter about support.

“These efficiencies are ensuring that our £178 million Defence equipment plan is going towards the state-of-the-art kit our Armed Forces deserve.”

Meanwhile HMS Queen Elizabeth temporarily left Moray waters yesterday as she performed a ceremonial deck landing on Scapa Flow, marking the 100th anniversary of the first ever landing of an aircraft on a ship off Orkney in 1917. She returned to the Moray Firth early this morning.