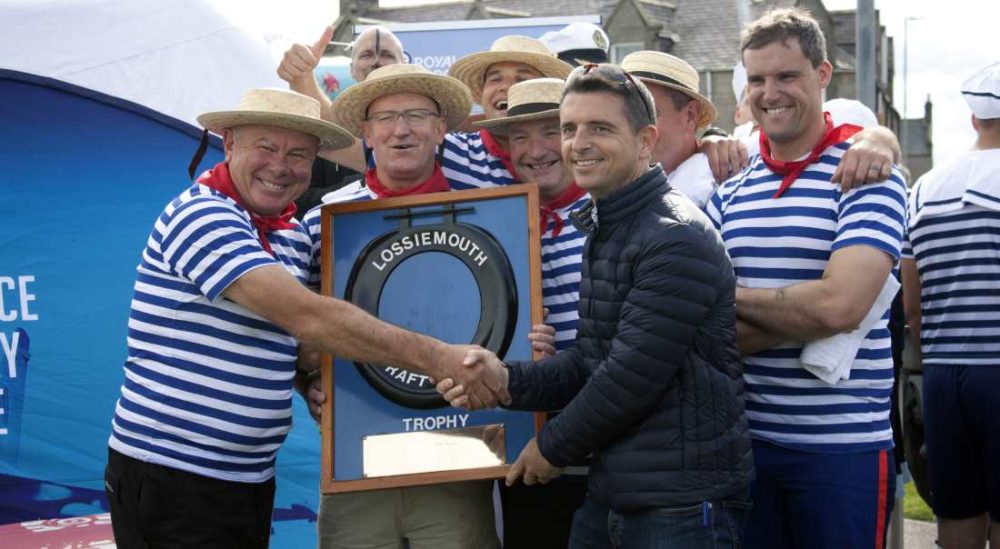 THOUSANDS FLOCKED TO the banks of the River Lossie on Sunday for the return of one of the most popular events on the summer calendar.

The Lossiemouth Raft Race had to be cancelled in 2016 because of high winds – but there was no such problems this time around, a mostly calm and sunny day greeting revellers to Lossiemouth.

A dozen teams competed for the coveted ‘Toilet Seat’ trophy but it was a familiar sight as the 2015 runners-up and previous winners stormed into the lead from the start, chose the perfect line around the bend and returned to the Seatown Bridge well ahead of the field (and while at least two rafts were still trying to get underway!)

The Steamboat Inn team took the trophy in style, dressed as gondoliers complete with straw hats they arrived at the start before anyone else to ensure their favour berth – and clearly had their tactics spot-on on a river that was barely knee-deep in places.

Second place went to another pub team – the Crown Inn who had travelled from Inverness to take part, while third slot went to the team from Miller & Swan Veterinary Surgery.

Race organiser for RAF Lossiemouth was Sarah Tompkins-Le who estimated that there was around a thousand at the event, although there appeared many more to more practiced local eyes. “It has been fantastic – there is nothing worse than planning something for months and then you can’t do it because of the weather,” she said after breathing a huge sigh of relief.

The proposed race by the Findochty and Burghead rowing skiffs could not take place because of the low water, but both put on a demonstration of their craft while the new under-construction Lossiemouth skiff was on show on the river bank.

Three local charities – MFR Cash for Kids, Outfit Moray and the Moray Inshore Rescue Organisation – will benefit from the event this year.