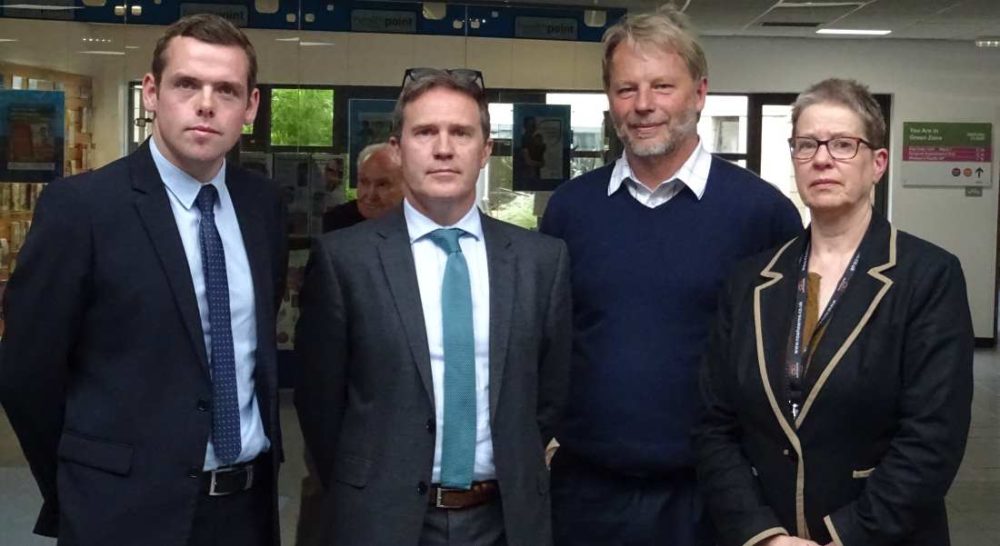 A MEETING BETWEEN Moray’s MP and senior managers at Dr Gray’s Hospital has produced some clarification over the future of paediatric care in Moray.

Douglas Ross MP has met with Alasdair Pattinson, the general manager at Dr Gray’s, Sue Swift, who is the divisional general manager of women’s and children’s services, and Dr Jamie Hogg, clinical lead at the hospital.

Following the meeting the MP said that he welcomed assurances that NHS Grampian was working hard to resolve issues around the manner in which the temporary closure of paediatric services was handled – it was not announced by NHS Grampian but rather came from a leak to the MP and to this community news site.

The MP also expressed concerns of parents and the Moray public, highlighting the strength of feeling demonstrated by over 3500 people signing a petition just twelve hours after it had been created.

Douglas Ross said: “I welcomed the opportunity to meet to discuss this crucial issue in Moray and express many of the fears and concerns that have been raised with me since the announcement last week.

“The changes to paediatrics comes so soon after the well-publicised problems surrounding the maternity ward and it is clear both these issues revolve around the availability and recruitment of junior doctors.

“At the meeting, I was able to highlight my concerns about the level of communication, both internally with staff and with the general public over this issue. It is of great concern that something as important as this should have been highlighted by a whistleblower rather than by the senior management team.

“Mr Pattinson assures me they are working hard to keep everyone better informed in future to prevent this happening again.

“I also expressed my worries that NHS Grampian were only a few days into a trial period aimed at working out how best to maintain a safe sustainable service, when they decided it was not working and announced this major change for inpatients.

“Whilst I appreciate this was not a decision that was taken lightly and care for children who are ill must be the number one priority, I remain extremely concerned about the continued reduction in services offered at Dr Gray’s.”

The MP concluded that some assurances were given but he remained extremely concerned, adding: “I do welcome the assurances given at the meeting that nursing staff will not be redeployed and NHS Grampian will use the time productively to provide enhanced training to the staff involved.

“NHS Grampian assure me that they are working tirelessly to find a solution to secure safe and sustainable services at Dr Gray’s but it is clear that it will be a fight to retain the service we are used to in Moray. I didn’t receive a guarantee that these temporary measures won’t become permanent but I will be working with anyone and everyone to ensure that doesn’t happen.”

Mr Ross also welcomed the fact that Mr Pattinson is keen to hold regular meetings with him to keep fully briefed of NHS issues affecting Moray.

This morning the public petition against NHS Grampian’s plans was approaching 6000 signatures after just over 24 hours.