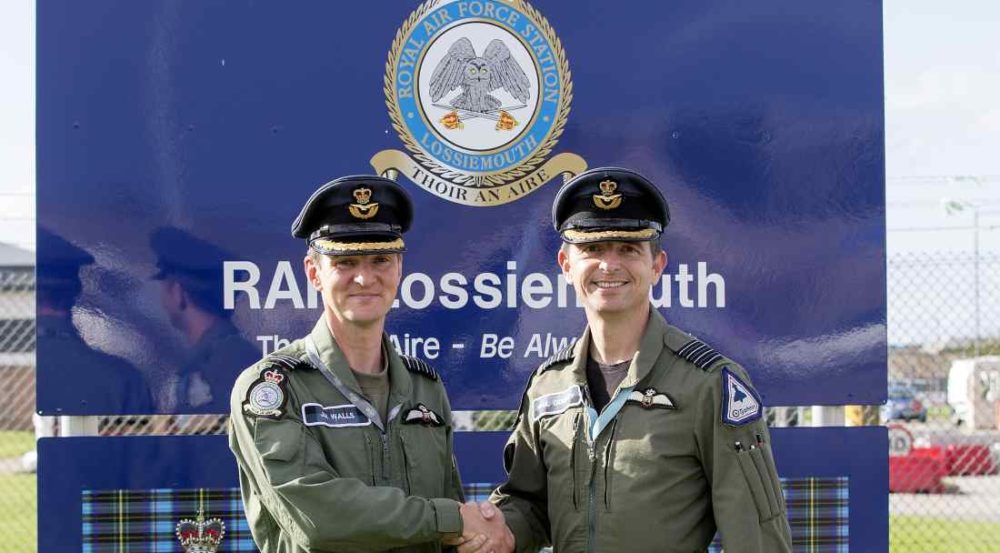 IT IS ALL CHANGE once again at the top with Group Captain Jim Walls DSO taking command at RAF Lossiemouth yesterday (Friday).

Moving on is Group Captain Paul Godfrey OBE, who has been in command at the base since November 2015, two years in control that saw the base providing significant operations support over Iraq, Syria and Nigeria as well as dealing with planning for the base future as a home for the UK’s Maritime Patrol force.

Group Captain Godfrey said: “It has been an honour to have been the Station Commander at RAF Lossiemouth.

“Being in command of a Royal Air Force base that is charged with directly protecting the United Kingdom’s airspace and is involved with current operations around the Globe was both challenging and inspiring. The work we do can sometimes put a great deal of pressure on our people and their families, but the Whole Force here continually demonstrate excellence and a can-do attitude that is humbling; it is undoubtedly the people I will miss.

“My family and I will be sad to leave Moray, we’ve made many good friends in the local community and have made the most of the opportunities and amazing quality of life available here. We will definitely be back to visit soon.

“As RAF Lossiemouth moves into its next chapter, I’m delighted to hand command over to Group Captain Jim Walls. He has been a Typhoon squadron commander at RAF Lossiemouth so is well aware of the challenges and opportunities the Station faces as it develops to become a MPA as well as QRA base. I’m sure he will enjoy what is undoubtedly the very best job in the Royal Air Force.“ Group Captain Walls was born in Australia but educated in the UK, attending Aberdeen University. He has flown Jaguar and Typhoon aircraft both as an instructor and operationally. He was also the Typhoon Display Pilot in 2007, and famously raced a Bugatti Veyron in a Typhoon.

He has held roles in the Typhoon development programme, and was Officer Commanding 6 Sqn at RAF Lossiemouth between June 2014 and November 2016. Group Captain Walls is excited to be in command of RAF Lossiemouth as the Station moves towards welcoming the Poseidon P-8 to RAF Lossiemouth.

He said: “It’s an immense privilege to be taking command of RAF Lossiemouth. Group Captain Godfrey has led the Station exceptionally through a significant, and busy, few years. I would like to thank him for his dedicated service and congratulate him on his promotion.

“It is an exciting time to be commanding the station with such huge investment over the coming years. This includes the introduction of the Poseidon Maritime Patrol Aircraft and another Typhoon Squadron.

“We will be reinvigorating RAF Coastal Command’s heritage with cutting edge technology while continuing to deliver QRA and global operations. I am particularly looking forward to working closely with the local community as we grow the station. It will undoubtedly be a challenging role but it is a real honour and I am ready.”