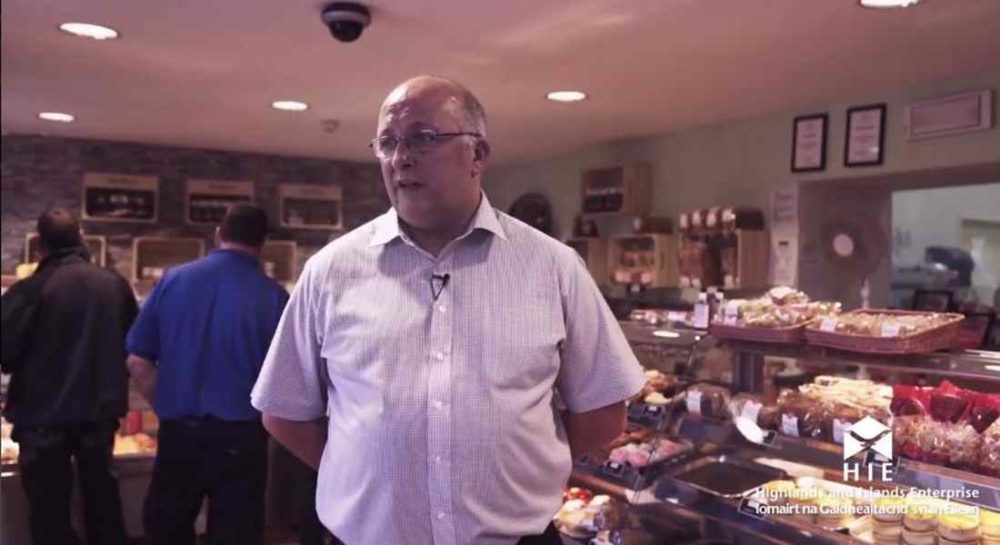 OVER 200 BUSINESS representatives gathered to honour key players in Moray at the 14th Annual Business Awards Dinner – the biggest black-tie event in the region.

Hosted by Moray Chamber of Commerce at Moray College UHI on Friday, the awards available on the evening were the Moray Export Award and the Main Business Award.

The Moray Export Award, sponsored by Walkers Shortbread, was presented by Mr Dave Edwards to the Forres-based Maclean’s Highland Bakery, who, in the last year have seen their export trade has grown again from 17% to 20% supplying countries as far afield as China, South Korea and Brazil.

Lewis Maclean, Managing Director of Maclean’s Highland Bakery said: “I am very humbled to win this award as there are some great businesses in Moray. I’ve got to thank all the team at MHB for making such great products as it makes my job to sell them so much easier. Lastly I would like to thank my wife Diane as on more than one occasion I have had to leave her in lurch and go away on business.”

The most prestigious award of the evening is the Main Business Award and is awarded to a company which has made a significant contribution to the Moray Economy. It is sponsored by The Moray Council and Business Gateway.

Moray Councillor John Cowe presented the awards to this year’s winner The Macallan Distillers Limited. Founded in 1824 in the heart of Speyside, The Macallan was one of the first distilleries in Scotland to be legally licensed. Since then it has built a reputation as one of the world’s leading single malt whiskies.

From its foundation to the present day The Macallan has been recognised for its outstanding quality, and owner Edrington has invested significantly to enhance this, notably with the new distillery and visitor centre that will open next summer. With 90 employees at its Speyside site it is a valued local employer as well as an international success

Graham Hutcheon, Edrington’s managing director of group operations, said: “We are honoured to have been recognised by the Chamber of Commerce.

“From its foundation in 1824, The Macallan’s reputation for unrivalled quality has made it a global leader among single malts, and we are confident in investing in the future success of the brand. The iconic distillery and brand home opening next summer will bring significant economic benefits not only to The Macallan and Edrington, but also to the wider local community.

“What makes this award particularly special is the level of collaboration that has made it possible. We have worked in partnership with other local companies, including Robertson and Forsyth’s, over many years.

“We have benefited from great support at local government level. Finally, I would like to thank the team at the distillery, whose expertise and dedication to quality have created so much of The Macallan’s – and Moray’s – success.”

Lara Mackay, Office Manager of Moray Chamber of Commerce said “We are pleased that even in a tough business climate, our Moray businesses are remaining resilient and proving time and time again that they can grow and thrive.

“We have a great range of sectors and businesses here, as well as having some of the world’s most well-known brands on our doorstep, we also have a number of very successfully SME’s and strong start-ups – a lot to be proud of.”

The event also raised funds for Moray Women’s Aid, a local charity who provide advice and support to women who have suffered any type of abuse be it mental or physical.

Within Moray they are able to provide temporary refuge for women and their children and offer them the support to determine their own future.

Set up in 1987, Moray Women’s Aid continue their good work and last year supported nearly 400 women in the area alongside almost 200 hundred children and young people.