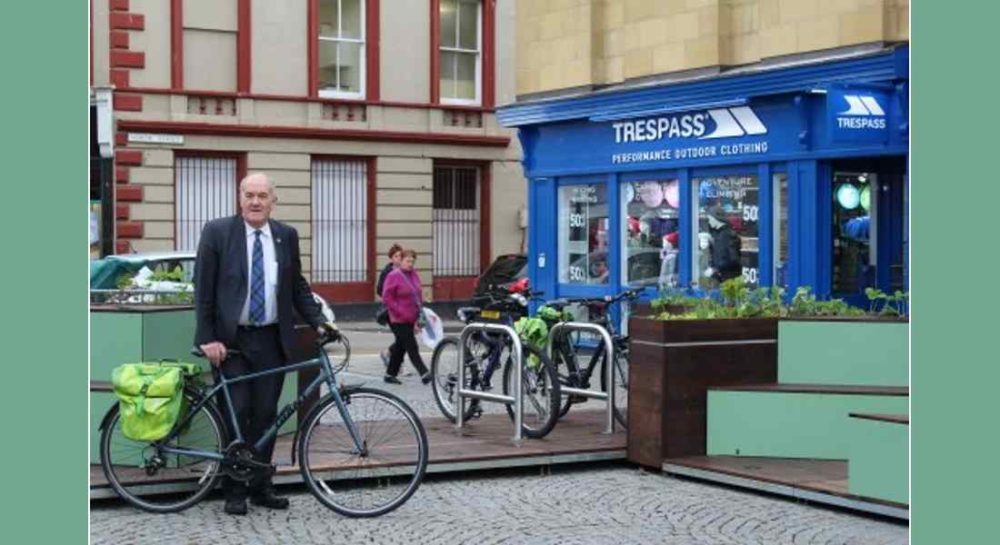 MORAY COUNCIL HAS solved a mystery that had visitors and residents in Elgin guessing for the last week.

Boxy seating had been put in place on the Plainstones alongside the Dandy Lion structure – but with nobody taking responsibility there was confusion over who might have been responsible for the new structures.

It has emerged that they are ‘The Parklets’, new bicycle and seating that was finally completed on Thursday.

Moray Council installed the structures that provide parking spaces for 12 bikes and features ‘inbuilt wooden seating’ which is surround by planters filled with herbs, fruit and vegetables – including strawberries.

REAP have planted the fruit and will maintain the planters as part of their edible gardening project ‘Grow Elgin and Beyond’.

The Parklets have been funded through the Scottish Government’s Paths for All project, and replace the bicycle parking lost when the Dandy Lion statue was installed.

Leader of Moray Council, Cllr George Alexander, regularly cycles into Elgin and said he plans to make full use of The Parklets.

He said: “It’s great to see this new feature on Elgin High Street. Lots of residents and visitors to Moray cycle in and around Elgin and The Parklets is perfectly situated for them to take a pit-stop and recharge their batteries while enjoying what Elgin has to offer.

“What’s more, this doubles the amount of parking space for bicycles that was provided there before. Elgin’s Transport Strategy is not only shaping the future of travel through Elgin, it’s also focussing heavily on active and sustainable travel. We’re taking every opportunity we can to make it easier for everyone to embrace cycling and The Parklets only adds to this.”