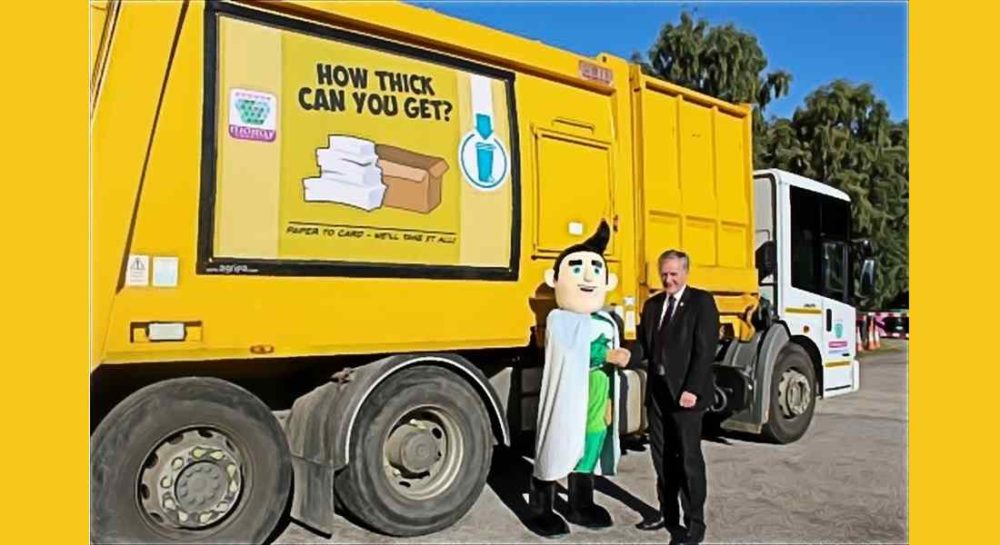 A NEW RECYCLING and waste campaign has been launched with new eye-catching designs installed on the side of Moray’s waste fleet.

These seek to encourage residents to recycle more – and employ smarter ways of disposing their household waste.

Chair of the economic development and infrastructure services committee, John Cowe, got up close and personal to ‘Enviroman’ at a launch event in the hope of encouraging greater effort adding to the already impressive 58.7% recycling rate achieved in the region last year.

Councillor Cowe insists that there is still room for improvement, adding: “We all need to keep up the momentum on recycling and make sure it becomes the norm.

“We have a great kerbside recycling service, but analysis from May 2017 showed that more than half of the waste in our green bins could have been recycled using the brown, orange, blue and purple bins provided to homes in Moray.”

The biggest hurdle facing the local authority is food waste which is still being found in green bins along with paper and card. Councillor Cowe said: “Together they account for almost 50% of the waste in our householders’ green bins. Food waste is the worst offender at 33%, but paper and card is still significant at 13.6%.

“By using the food waste and paper recycling bins provided by Moray Council, the amount going into landfill would reduce significantly. As a result, less of our taxpayers’ money would be spent on landfill tax – which cost us £1.8million last year.

“These are really simple switches that, once in the habit, make such a huge difference. Our latest campaign is designed to simplify the messages around recycling – making it clear to residents just how much can be recycled.”