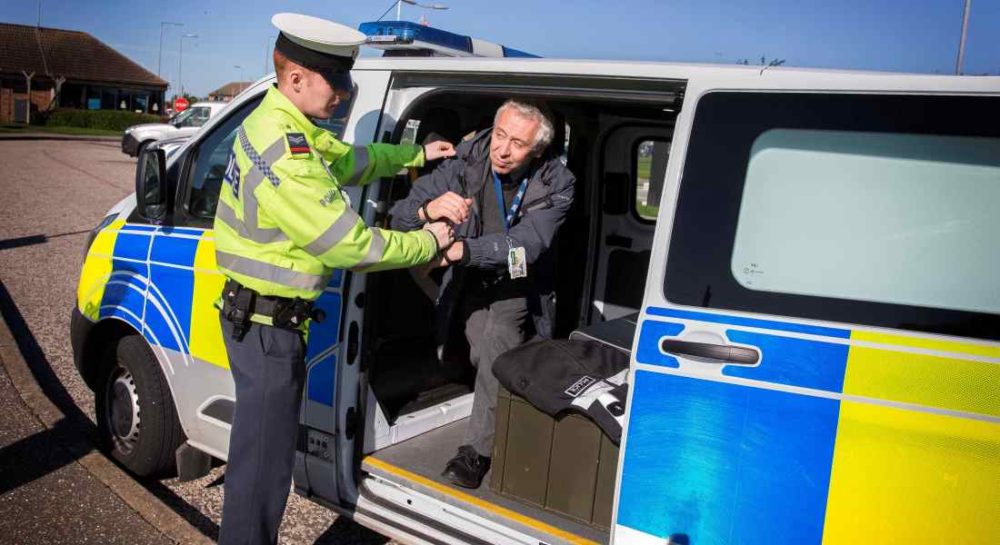 FOR FRANK CASCARINO the end of his working week at RAF Lossiemouth was a very special one – it was his last after 45-years – 21 of them at the Moray base.

The MoD Civil Servant was originally from Kirkcaldy and had no plans to join the Ministry of Defence when he left Auchmuchty High School.

However, the opportunity to train with the prospect of a job at the end was attractive to him – so he began his MoD career in 1972 on a technician apprenticeship at HM Naval Base Rosyth.

The apprenticeship saw him gain qualifications and experience for the future technical and managerial roles he would fill at Rosyth. Over the years Frank’s work has supported numerous significant events in the recent history of the MoD, including the Polaris submarine programme and the Falklands conflict.

His career progressed through the 80s with promotion through the grades as he moved into engineering management roles at Rosyth. In 1991 Frank transferred to HM RM Condor, Arbroath as the Base Property Officer, and then in 1996 to RAF Lossiemouth as Health & Safety Officer.

Responsible for safe working of a mixed military and civilian workforce at two very diverse military establishments led to a variety of challenges. But Frank ends his career with pride knowing that he has a 21-year record in this field with a perfect relationship with the Health And Safety Executive.

To recognise Frank’s 45-year career with the MoD he was ‘honoured’ with a tradition usually reserved for retiring Warrant Officers, when he ceremoniously ‘removed’ from the base. After Frank’s final meeting he left the room to be met by two RAF Police Officers who clamped him in handcuffs, escorted him to their waiting Police vehicle, and dropped him off at the Station main gate. “Knowing Frank as I now do, I’m sure he was as dedicated to the MoD in his early career as he has been to RAF Lossiemouth since 1996. His calm, respectful and professional way of working with personnel of all ranks has been an example to us all, and ensured RAF Lossiemouth has an excellent health and safety record.”

Frank lives in Elgin with his wife Ishabel and their two dogs and now hopes to spend a bit more time with his family. He plans to continue his support of the Therapet scheme run by Canine Concern Scotland Trust.

Frank said: “I’ve had a challenging career in the MoD. When I started my apprenticeship 45 years ago I never imagined the work I would go on to do and the events and projects I would be involved in – being a part of these projects makes me very proud.

“As you’d expect I’ve seen many changes over the years, but the one constant is how important people are no matter where you work or what you are doing. This is maybe what I’ll miss the most.

“I am looking forward to retirement though and to expanding my support to Therapets by volunteering in others areas. I’ll also be spending a lot more time looking after my lovely Granddaughter, Penny.”