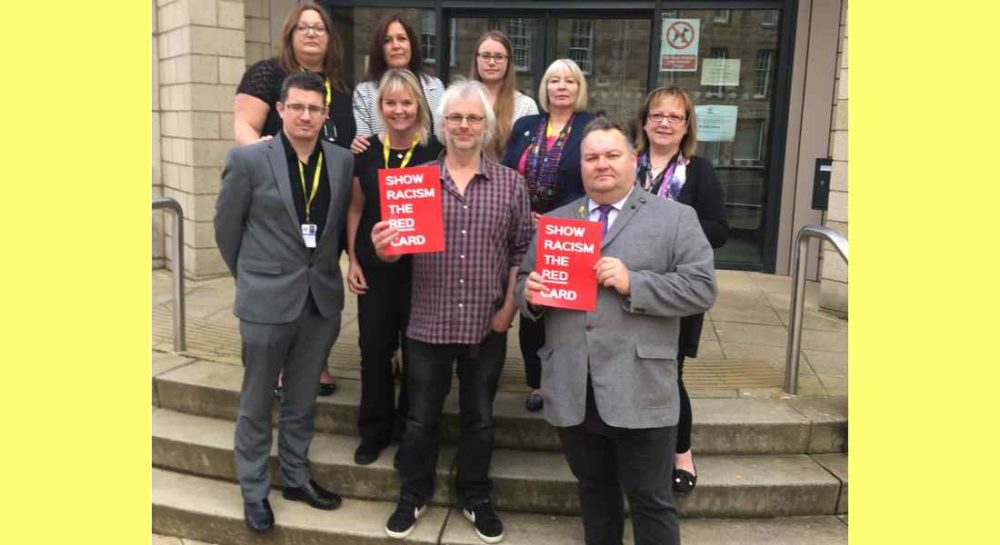 SNP COUNCILLORS LAUNCHED an astonishing attack on Moray’s MP in the council chamber on Wednesday, branding the MP a ‘racist’ and insisting they were not politically motivated.

A motion put to the Full Council called for condemnation of Douglas Ross MP following his remarks in a ‘Meet the MPs’ snap video interview published in August – but which took place some months earlier.

Tory councillor Tim Eagle hit back at the “politically motivated” move, saying that the MP had already apologised and accepted that his answer was inappropriate – but still highlighted a major issue for Moray and other communities throughout the country.

The motion proposed by joint leader of the SNP group, Graham Leadbitter, and the councillor for Fochabers/Lhanbryde, David Bremner, called on Moray Council to condemn the comment “of the former member of this council and current MP for Moray”.

After the main point of the motion was rejected by Tory and Independent councillors, Councillor Bremner hit out at the Administration group members, saying: “While I am pleased that the council voted that it “upholds and reiterates its legal commitments to equality and diversity”, I am extremely disappointed that the Council Leader persisted with the falsehood that the comments by Douglas Ross have been apologised for.

“That is simply untrue. No proper apology has ever been issued for the words he used. I am also extremely disappointed that he chose to paint the motion as political. Standing up for equalities for all should never be viewed as ‘political’.

“Equalities are a human right and we must all take responsibility for upholding those rights and challenging racism and bigotry in all its forms and whoever it comes from. In a representation made in a recent surgery of mine a prominent business owner expressed their views on these comments in a very heartfelt way. In that representation one succinct line stood out and that was that “There should be no place in politics for racism, he is a bigot and a disgrace”.

Councillor Leadbitter added: “As councillors holding public office, with a legal duty to uphold equalities laws, we have an obligation, both moral and legal, to challenge and condemn racist statements like that made by Douglas Ross.

“It is totally unacceptable and the failure by some councillors today to condemn it and, in fact, be apologists for Mr Ross, is also totally unacceptable. The Council Leader considered this motion that stood up for equality to be a waste of time and for that to be the case on the same day that the Council appointed an Equalities Champion is frankly astonishing.”

Buckie councillor Tim Eagle, however, insisted that the SNP motion was clearly politically motivated and should never have been brought to the Council chamber.

He said: “I find it regrettable that the SNP have decided to bring party politics into the council chamber in this way.

“Douglas Ross has already said that he regrets referring to gypsy/travellers in the quick-fire interview. However, the issue was uppermost in his mind at the time due to representations from constituents.

“The issue of gypsy travellers is complex and sensitive. SNP councillors in Moray, when confronted with this issue by local communities in the past who were unhappy with encampments, have invariably taken the side of the communities and campaigned against halting sites being established locally.

“They have shown little concern for the travelling community itself. Moray council has a big task ahead of it in terms of balancing the budget – and this remains the priority for the Conservative group – we will not allow party politics to get in the way of our desire to serve the people of Moray.”

In a brief statement issued last night, Douglas Ross said: “I welcome the rejection by Moray Council of the Moray SNP’s divisive motion on gypsy travellers.

“The majority of councillors have shown good sense and a determination to treat this complex issue seriously. It is important that we see increased dialogue between members of the settled community and members of the travelling community – we can then develop solutions that meet everyone’s legitimate aspirations.

“The SNP approach, which is to campaign against gypsy travellers when it affects their communities and then pretend to be outraged when someone else mentions the subject, has been well and truly found out.”