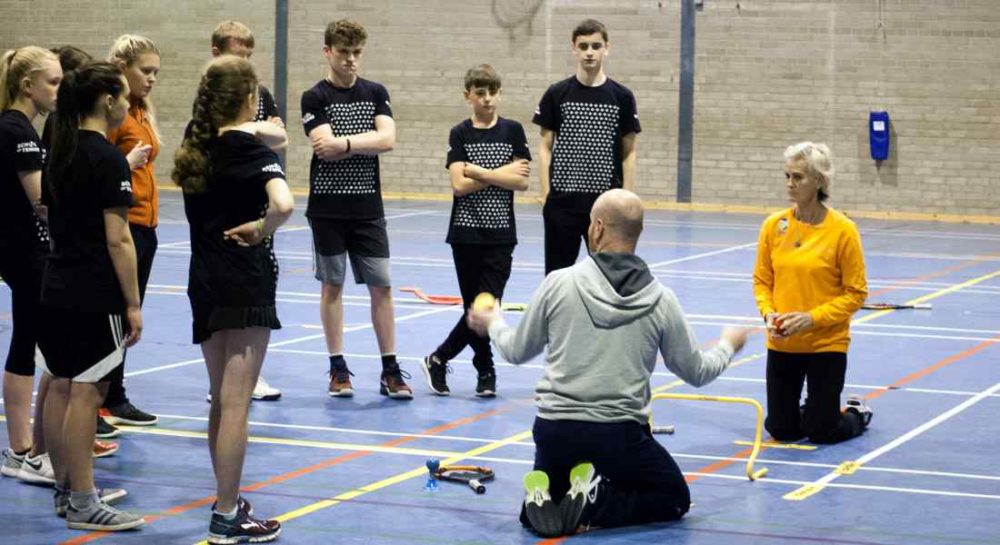 JUDY MURRAY AND her coaching team have returned to Forres Academy this week – for the second time this year.

The mother of Scotland’s two Wimbledon champions was in Moray as part of her Tennis on the Road initiative, Mrs Murray and lead coach Kris Souter spending a day with ‘Young Tennis Ambassadors’ at the school.

Judy said that building links between the school and local tennis clubs in the community was one of the most important elements of making tennis more widely available. She said: “Our philosophy is to take tennis into areas where you wouldn’t find it has a large presence in schools or the local community.

“The last time we visited we trained up teachers, active schools coordinators and pupils to show them how to get started in developing tennis within the community.”

Judy and Kris worked with the smaller group to develop specific coaching skills on this visit, saying that it was an ideal setup because of the space indoors and outdoors for tennis at the Academy.

She added: “Any sport is only as good as its roots and that’s where we’re taking tennis back to, to build up the network of people engaged in tennis and coaching. By equipping these young ambassadors with the skills during these training sessions, we’re actually developing a workforce.”

Jana Brady is due to take up the role of Head Coach at Forres Tennis Club in November, and said the workforce being created would only strengthen the link between the school and club.

She added: “These young ambassadors all have the opportunity to gain coaching qualifications and we’ll support them in helping them achieve this. They can also, through their volunteering at the club, help us and gain valuable work experience at the same time.”

Ann Rossiter is a Home Economics teacher at Forres Academy, but also coordinates sports activities for the students.

She said that the School of Tennis status, which was awarded to the academy last year, has opened up new opportunities to pupils – like these Tennis on the Road sessions: “Our Young Tennis Ambassadors, all of whom are between S2 and S5, were the focus of this training session. It’s helped to equip them with specialist skills to coach others interested in learning to play tennis.

“They’re working towards qualifications like the Young Tennis Leaders Award and improving community links through tennis.”