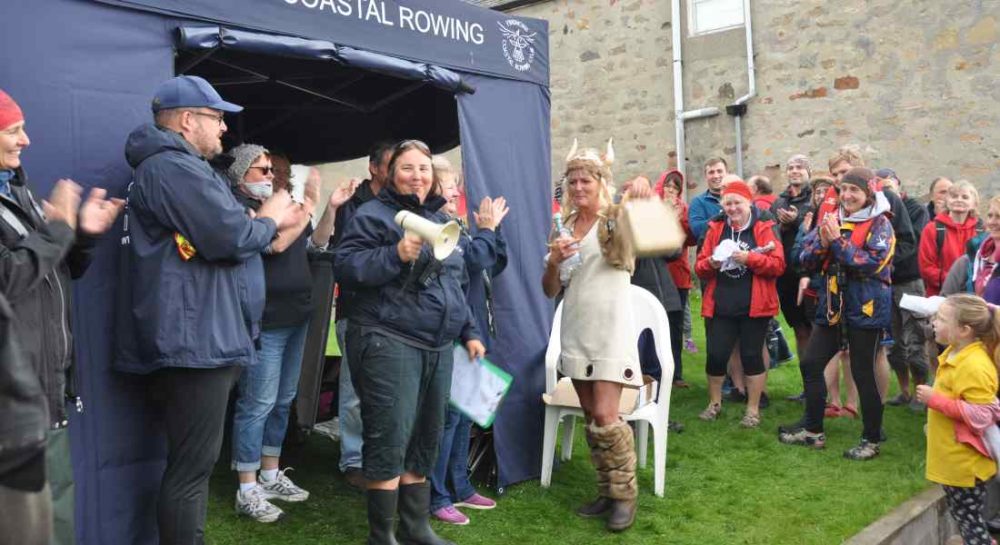 FINDHORN COASTAL ROWING CLUB’s first ever regatta has been declared a success after ten teams entered at the weekend from all along the Moray Firth.

The host club was joined by teams from Portsoy, Avoch, Findochty, Burghead, Collieston, Cullen, Cromary, Golspie and Chanonry – with many getting deeply into the spirit of the even with fancy dress worn by many of the rowers.

Leah Fraser told insideMORAY: “The conditions for racing in Findhorn bay were challenging with a very unforgiving incoming tide for the shorter races at the beginning of the day.

“There were a few caught up in a less than quick slick starboard turn rowing into the oncoming tide – lessons were learned in very different sea conditions compared to the open waters of The Moray Firth.

“However, it was great to see the tradition of the regatta returning to Findhorn and many of the local spectators reminisced about the by gone days of the regatta, using the piers as a traditional start line.

“With the draw made up of head to head races between the clubs this made for interesting viewing.  As high tide approached the racing moved into longer events – I say “longer” than what was advertised to been 1.3km races.

“This proved to be a slight under estimation so we could avoid too much chaos with a single buoy turn for all 10 boats to race around. It was a grand sight to see such an armada of skiffs racing down the bay.

“Once the women’s and men’s open had completed, the mixed race and scramble race had a much more realistic 1.3km distance to fight it out over and gladly the single buoy turn was not the carnage we had envisaged.”

When the positions were confirmed it was the Avoch boat who came out on top, with Golspie, Burghead and then Findhorn taking up the top four placings.

The event went on into the evening with a drumming workshop especially proving popular for those to wish to improve their timing and live music from the fabulous Boat Shed Band.

Leah said: “Many Thanks to all for entering into the spirit of the day and making it such a fun event – we are already looking forward to next year.