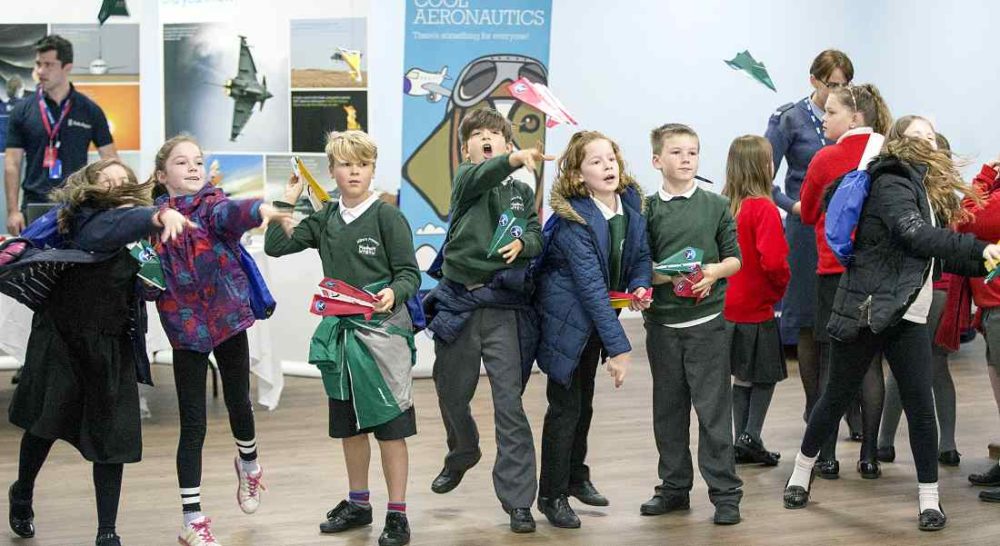 RAF LOSSIEMOUTH HAS played host to an inaugural event under the RAF100 STEM (Science, Technology, Engineering and Mathematics) initiative.

Part of the RAF’s 100th Anniversary celebrations, the initiative was launched in Glasgow by Air Officer Scotland, Air Vice-Marshal Ross Paterson – who also visited the STEM event at Lossiemouth.

“This is the first of many events in the build up to the Centenary of the Royal Air Force,” AVM Paterson said, adding: “We are committed to using this unique opportunity to inspire the next generation in Scotland by growing their interest in Science and innovation.”

Over 900 schoolchildren from 24 schools around Moray attended the Station’s event over three days, with a range of industry partners including Rolls Royce, BAE Systems and Raytheon, as well as the Royal Aeronautical Society, RAF Lossiemouth’s ambitious ‘STEM Week’ certainly helped to inspire the next generation of scientists and engineers among Moray’s schoolchildren. The activities were as varied as the STEM disciplines themselves, with interactive displays from RAF Lossiemouth’s own Dental & Medical, Physical Education, Fire & Rescue and Mechanical Transport sections. The children had the opportunity to learn about the science of combustion, aerodynamics, hydraulics and human anatomy.

From industry partners and local businesses and organisations as diverse as Diageo and the Royal Northern Countryside Alliance, there was plenty of exciting opportunities for the children to get a ‘hands on’ feel for the varied and ingeniously showcased technologies.

Whether whilst learning how to make the perfect paper aeroplane or about the technical advances in the dairy industry, the children learned that STEM could be found in the most unexpected of places. Maxine Scott of Moray Council’s ‘Moray Skills Pathway’ explained: “It’s much more engaging for the young people to take part in things where they feel they’re contributing. The more ‘hands on’ the activities are, the more memorable they are for the children.”

Wing Commander Dan Lunnon-Wood, RAF Lossiemouth’s Officer Commanding Base Support Wing concluded: “Today is about inspiring and enthusing young people and making them aware that STEM permeates every facet of their lives. As we move towards the centenary of the Royal Air Force, we are looking to our second century and in particular inspiring the next generation.”