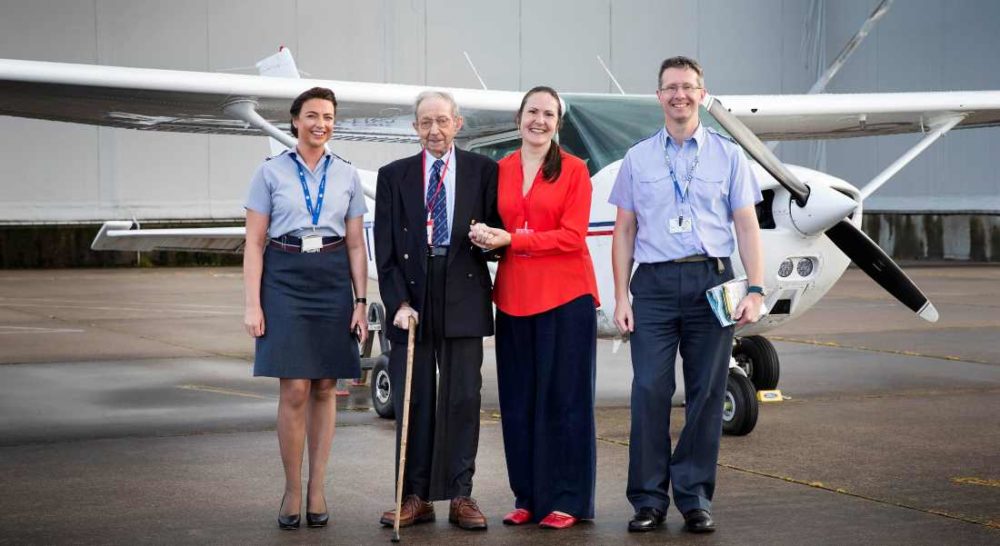 A FORMER WORLD WAR II pilot’s dream has come true thanks to the Kinloss-based Moray Flying Club and personnel at RAF Lossiemouth.

George Harvey spent 38 of his 96 years in the RAF – joining in 1939 and flying the famous Beaufighter Meteor and Mosquitos during the second world war.

No surprise then that high on his bucket list was the desire to fly just one more time – and when they learned that at RAF Lossiemouth there was an immediate determination to help him achieve that wish.

They worked with the flying club to ensure George had a flight in a Cessna 172 flying out of Kinloss Barracks recently after learning of his dream from Mrs Claire Nias, who is responsible for caring for the war veteran.

Flying Officer Chloe McFarlane, RAF Lossiemouth’s Station Adjutant, knew it would be impossible to get a flight for Mr Harvey in one of the Station’s Typhoons – so contacted the Moray Flying Club who were happy to help.

Flight Lieutenant Ian Bright was to be Mr Harvey’s pilot for the sortie that would take them along the Moray coast. George had obviously lost none of his typical military humour when he remarked that he was disappointed not to see a Mosquito on the airfield – and said of the Cessna “if this is all we have then this will have to do.”

Flt Lt Bright was delighted to be able to make Mr Harvey’s dream come true, and could tell how much it meant to him, he said: “It was a huge honour for me to be able to take Mr Harvey flying once more – he truly is a fantastic character who had us all laughing, he still possesses brutal military banter.

“Once airborne it became clear that lots of memories were rushing back to Mr Harvey, I think he had a tear in his eye.”

Under Flt Lt Bright’s supervision Mr Harvey was also able to take control of the aircraft briefly. After the flight George was taken for lunch in the RAF Lossiemouth Officers’ Mess and presented with a Station tankard.

He said: “I’ve had the most fantastic day; it has been so wonderful to fly again.”

The Moray Flying Club is a not-for-profit military flying club for Service personnel and their families – it aims to provide cost effective flying to personnel from the RAF, Army and Royal Navy as well as Air Cadets, University Air Squadron members and Commonwealth Service personnel.