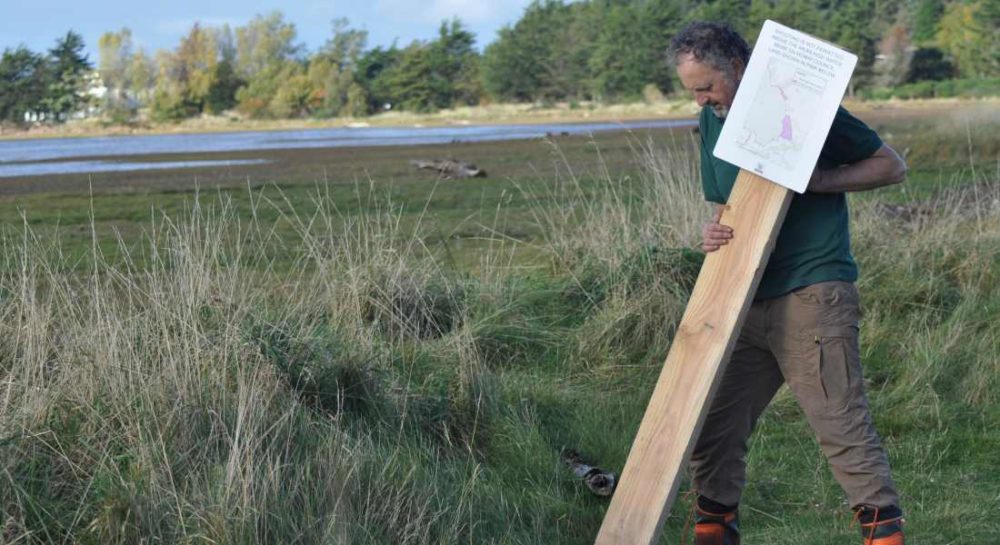 MORAY COUNCIL HAS erected new signage on the council-owned areas of land on Findhorn Bay to enforce their new shooting ban.

The scheme was proposed following extensive discussions with interested parties – although not all agreed, with some wildfowlers saying that they would defy any such scheme.

However, Moray Council reaffirmed its own position by approving the scheme and declaring that shooting would not be permitted at any time on Council-owned land – reinforcing the law which, in any case, states shooting should never take place above the high water mark.

Anyone shooting in this area is committing a criminal offence and should be reported to Police Scotland. Access to permissible shooting areas across this land is, however, allowed.

Chair of the ED&I committee, Councillor John Cowe, said he hoped the wildfowlers will respect the council’s position the same as they would any other landowner, adding: “The exclusion of our land from wildfowling still leaves a large area of foreshore, between high and low water marks, for legitimate activity.”

The wildfowling season started on September 1st and lasts until February 20th. The voluntary permit system introduced for this season will be reviewed after February 20th to ascertain its effectiveness.

The permits were introduced following protests about wildfowling from a group called Friends of Findhorn Bay. Leader of Moray Council, Cllr George Alexander, has urged wildfowlers to get behind the scheme.

He said: “It is in the interests of all those who enjoy the Findhorn Bay to ensure that this voluntary system works. Reasonable people should be capable of arriving at a reasonable agreement without resorting to the law.”

However, last night the group Friends of Findhorn Bay welcomed the Moray Council announcement – but said that since the start of the season regular early morning shooting has taken place, sometimes before 6am and on the Council land which is subject of the ban. A spokesman said that police had been called following complaints from residents that wildfowlers were shooting “in close proximity to houses”, the spokesman saying: “Many wildfowlers are showing a total disregard to the voluntary agreement that was put in place by Moray Council to regulate the shooting.

“They are actively shooting on Mondays, the only other shot-free day apart from Sunday which was agreed on. Last Monday, there were more than 10 shooters in hides in the restricted area in the south-east corner, shooting from 6.30am until after 10am – and then again in the afternoon and evening.

“Police were again called out following an incident of shooting on a Sunday, which is illegal. Residents around the bay continue to find dead and dying geese, these are a result of indiscriminate shooting and not having a gundog to retrieve shot birds.”