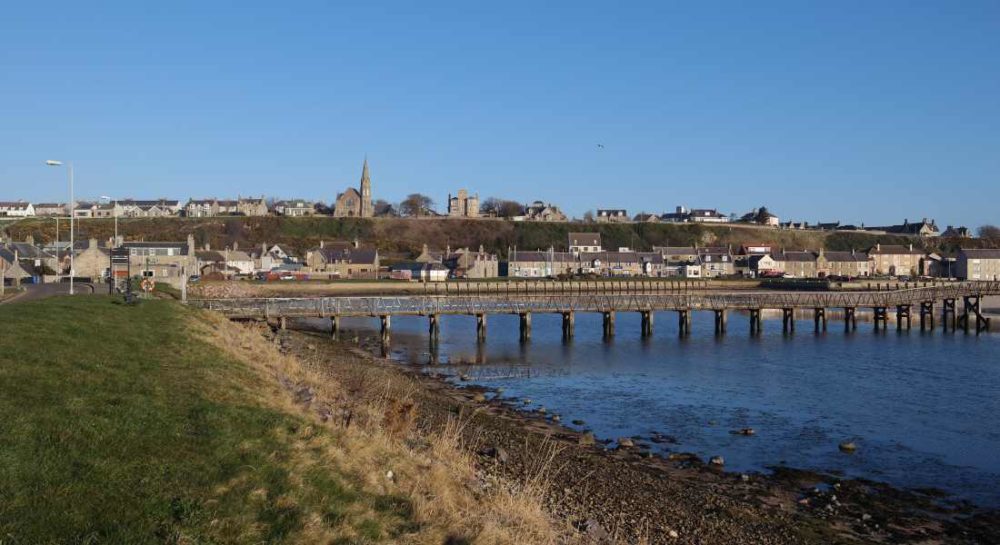 IT HAS PUZZLED COMMUNITY leaders in Lossiemouth for years – why nobody would ever admit ownership of one of the most iconic structures in Scotland.

The Seatown Bridge in Lossiemouth is one of the most admired by residents and visitors alike, but fears have grown through the years over the condition of the bridge.

Determined to finally get to the bottom of the entire saga has been the Lossiemouth Community Development Trust, who last year secured funding to launch a legal investigation that they hope would finally find an answer.

Now the solicitor acting on behalf of the Trust, Peter Brash from Elgin firm Grigor Young, has published his report – one that establishes that legally, nobody owns the structure!

In the report, published on the LCDT Website, Mr Brash explained: “Title searches in the national property register showed that the last known owner of the ground on which the bridge is constructed was The Lossiemouth Old Harbour Commissioners. They became owners around 1915. They ceased to exist at some time in the middle of last century and no trace of a successor could be found.” Having established that, Mr Brash said that such ‘ownerless’ property would generally become the property of the Crown. However, after months of discussion with the Queen and Lord Treasurer’s Remembrancer (QLTR), who are the Crown’s representative in Scottish property matters, it was established the bridge was ‘bona vacantia’ – ownerless goods.

Further consideration by QLTR led to a ‘Notice of Disclaimer’ letter, in which they exercised their discretion to waive and disclaim any Crown right and title on the bridge.

Mr Brash said: “It means that the bridge and the ground on which it stands could be acquired by an individual or organisation. One available method appears to be in terms of Section 43 of the Land Registration etc. (Scotland) Act 2012.

“Under this provision, someone who has “possessed” the ground in question for a period of at least one year may be able to register a title to it.”

The remaining question is – who would wish to assume ownership of a structure that is in urgent need of repairs that could themselves prove costly.

Mr Brash continued: “The bridge is not in a good state. Superficial repairs for safety reasons are already quite urgent. Donnie Stewart’s fascinating YouTube video from 2015 (“Lossie History – The Briggie”) already illustrated several personal injury risks from rusted parts of the structure. Its condition will only get worse through the effects of wind and sea.

“Now that we appear to have better clarity on the ownership – or non-ownership – of the bridge, the discussion will have to move on to how the bridge can best be owned, managed and preserved for future generations.

“It’s not a structure which will readily generate an income on its own and yet it is a vital connection to the East Beach and part of the wider coastal path network. Were the bridge to be closed or removed, people would surely find other methods of getting to the beach and it would only be a matter of time before someone was injured or drowned. Loss of the bridge is not an option.

“Many would say that the Moray Council should take on ownership or maintenance of the bridge but, in its present state of financial health, it’s hard to see the Council volunteering.

“In the months ahead, LCDT will be encouraging discussion of the issues and there may well be some hard decisions to make.”