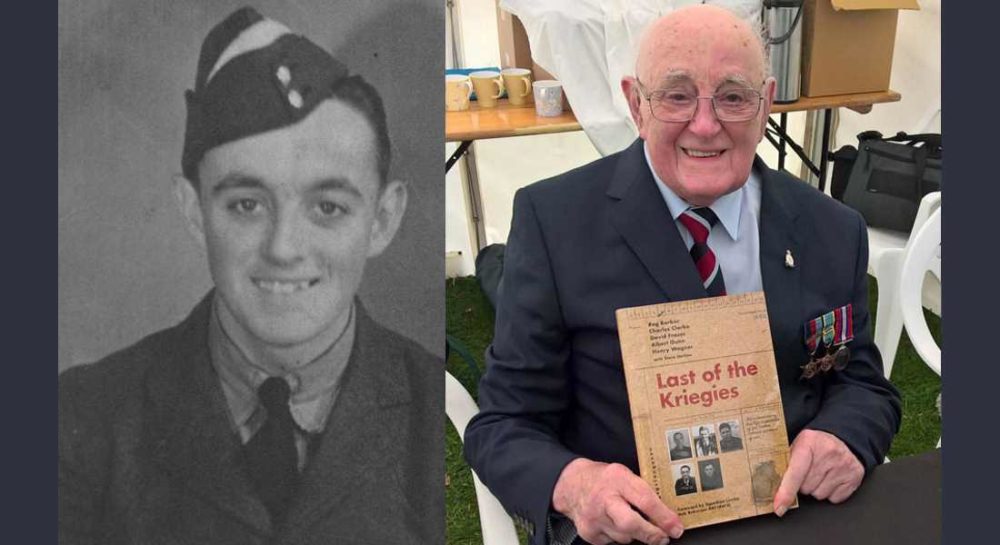 AN RAF WORLD WAR II VETERAN whose war service began in Moray as a gunner on Wellington bombers has recounted his experiences in a new book.

Albert Gunn, 93, has recorded his amazing story first when training for the most dangerous of all roles he was to undertake from the Moray base, and then later on his life as a captured ‘guest’ of the Germans as a prisoner of war.

The book – Last of the Kriegies’ – features Albert and his four remaining RAF Bomber Command colleagues who ended up as POW’s – Reg Barker, Charles Clarke, David Fraser and Henry Wagner. Each shares the journey they went through joining up with the Royal Air Force, their training and crewing up, and operational duties with RAF Bomber Command.

For Albert that journey began at Lossiemouth, the Fifer telling how he reported to the Moray base and got down to work training in the classroom and then on the Wellington: “Our billets were Nissen-type huts in Lossiemouth itself, just off the beach.

“The aircraft we were flying was the Wellington twin-engine bombers – a well-tried and liked aircraft.”

Training over Albert was on a mission on board a Halifax bomber that suffered “catastrophic” engine damage during a raid on Berlin in 1943. He parachuted safely from the aircraft but was captured. The book outlines their attempts to escape capture – and of the final days of the war when with thousands of other POW’s they were forced to undertake the ‘Long March’ – an attempt by the Nazi regime in its final throes to keep hold of their prisoners.

Ultimately, Albert and his colleagues were liberated by advancing Russian and American troops before being returned home. By then Albert weighed just a little over seven stone.

Last of the Kriegies is available from Amazon and other booksellers.