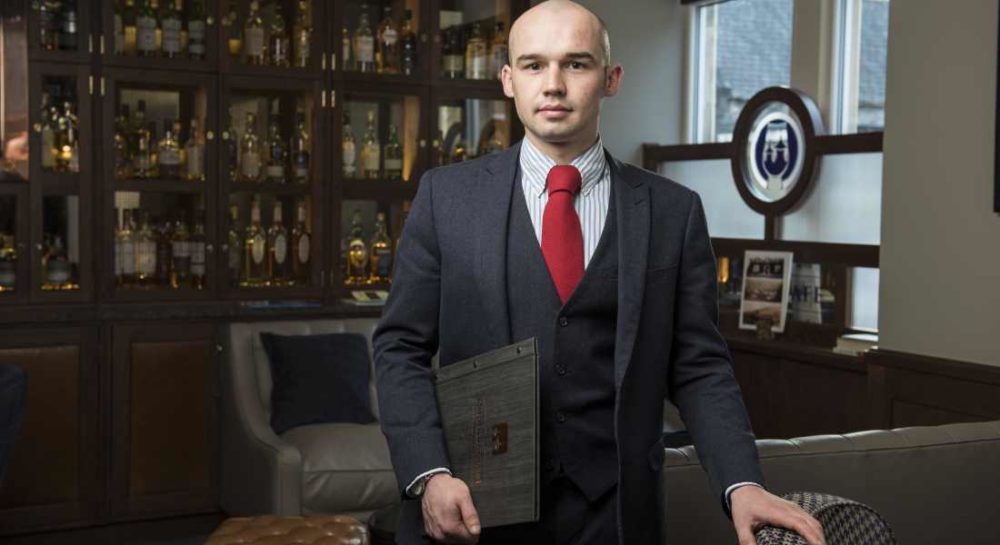 THE GENERAL MANAGER of a luxury Speyside hotel has been named as one of the region’s best young talents in the hospitality sector.

Neil Slessor from The Station Hotel in Rothes has been shortlisted as a finalist in the ‘rising star’ category of the Highlands and Islands Tourism Awards in recognition of his drive and passion for the industry.

Neil (26) has been at the helm of the boutique luxury escape since it opened in 2016, and over the past 18 months the hotel has grown a reputation for first-class customer service and an excellent visitor experience.

He was appointed to the role by the Forsyth family, which owns the hotel as well as the renowned copperworks which supplies stills to the distilling industry worldwide. Neil shared their vision to turn the prominent run-down property into a hotel the Speyside region could be proud of, and has been an integral part of the project since the planning stages.

With no previous background in hospitality management, he undertook numerous courses to prepare him for the role, but his focus on delivering the best possible guest experience is largely based on gut feeling and his own expectations.

Neil said: “I put myself in the guest’s position and think how I would want to be treated, what would make me feel valued and how I would want the hotel to be presented. If it was me, I would want perfection so this is what I strive to achieve and what I ask of the entire team.

“It came as a huge surprise to learn that I had been shortlisted for this award. I just want guests to really enjoy their time with us and remember it for years to come – to me, I’m just doing what anyone in the hospitality industry should do.

“However, I do feel really proud and honoured to be in the running for it and I owe Richard and Heather Forsyth so much for taking a leap of faith in me. I’m a Rothesian through and through and what really drives me is bringing people into the town and giving local people a great venue on their doorstep.”

The regional rising star category of the awards singles out those in the hospitality sector under the age of 30 who demonstrate a passion, ambition and dedication to have successful careers within the industry.

Judges put Neil on the shortlist after learning how he goes the extra mile for guests – personally driving them to visitor attractions on his day off when there has been no public transport available and helping them research local history or acting as a tour guide by organising exclusive visits to the copperworks.

His warm and affable personality frequently receives comments on hotel review websites, and he has been the driving force behind personal training and development plans for staff, ensuring that they also raise the bar on customer service.

Hotel owner Richard Forsyth says the recognition is very much deserved: “Neil came to us at the start of the renovations to the hotel and asked how he could be involved. I liked the idea of a ‘Rothes loon’ running the place and a training programme was set up.

“He tackled this with vigour and we now have an ultra-enthusiastic manager who gives 100% to everything he oversees. Neil, without doubt, deserves this nomination and we wish him well in taking this prestigious prize back to Rothes.”

The winner will be announced at a ceremony in Inverness on November 3, and will go on to represent the region in the national finals of Scotland’s tourism Oscars, the Scottish Thistle Awards.