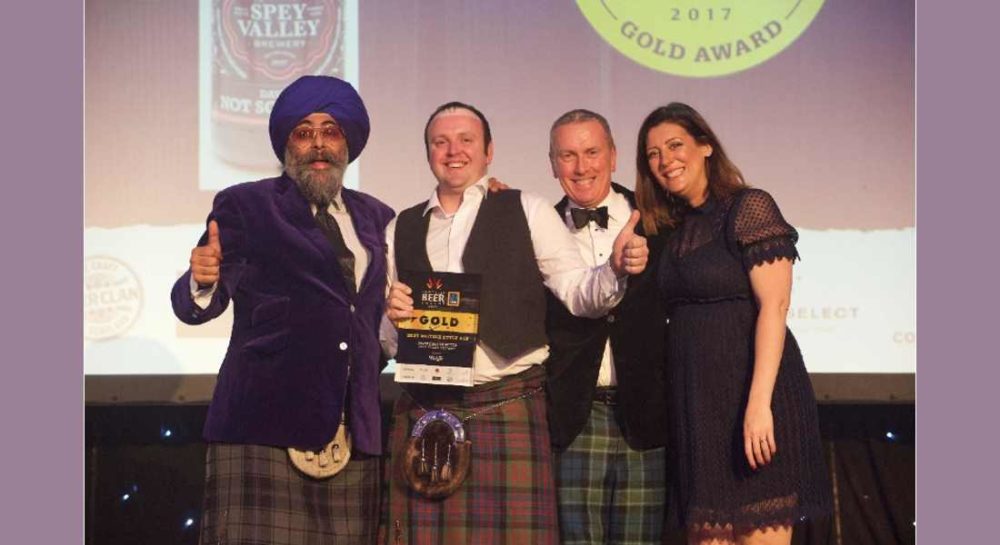 A SUPER SEPTEMBER – that was the verdict on last month from all connected with the Spey Valley Brewery after they collected not one, not two – but three awards in a matter of weeks.

The Mulben-based outfit scooped a national accolade at the second annual Scottish Beer Awards last week – their ‘David’s Not So Bitter’ topping the list of Best British Style in the coveted taste categories.

That followed blind tasting by one of the largest and most experienced judging panels in the history of any beer competition ever held in the UK.

David MacDonald, co-founder and managing director (and definitely ‘not so bitter’ head brewer) was delighted to collect the Gold Medal for his malty, sweet ruby ale – the perfect example of a traditional ‘Best Bitter’.

He said: “It’s felt like it has been a long time coming, as the brewery turned ten this year, and these are our first awards. It’s been difficult to find the time to enter awards before this year, however, as up until 2016 the brewery was a hobby which I undertook alongside my ‘day job’ as a distiller.

“I’m absolutely delighted with all the awards that Spey Valley Brewery has picked up this year, especially David’s Not So Bitter’s Gold from the Scottish Beer Awards – the competition is completely blind tasted by some of the biggest names in brewing, so it’s a real honour to have received the top prize in one of the taste categories.”

The Scottish Beer Awards ceremony took place just three weeks after the SIBA (Society of Independent Brewers) Scotland Awards, where a huge range of beers were judged across a number of styles in separate cask and small pack (bottle and can) competitions.

The SIBA Scotland Independent Beer Awards are judged mostly by brewers, industry experts and beer journalists and are very much seen as the prestigious ‘Brewers’ choice Awards’ by the industry.

Spey Valley Brewery adds these three awards to the Great Taste award achieved by their winter special, Spiced Oot, earlier in the year. The chocolate orange stout picked up a one-star award in The Bottled Beer category, with feedback from the judging panel suggesting it’s “an interesting beer… One to try, for sure”.

A busy month for the Brewery – who are now hoping their luck will hold in the Highlands and Islands Food and Drink Awards, which will be announced later this month. Spey Valley is shortlisted for the Business Growth Award following its expansion from a 300L brewery in a farm shed to the biggest brewery in the local area, now able to produce 3000L per brew, on a top-of the range brewkit.