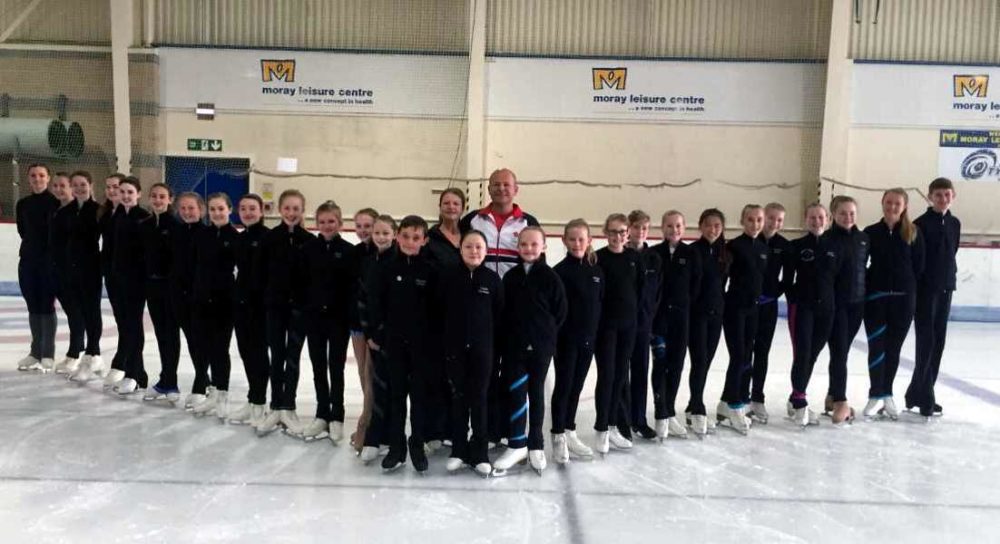 FEARS OVER THE FUTURE of the Moray Leisure Centre will be of particular concern for the region’s highly successful ice skaters – five of whom have qualified for the British Championships.

For now, however, it is very much business as usual for the Moray Figure Skating Club who have clinched another set of stunning results at the latest event in the national skating calendar.

On top of winning two golds, three silvers and three bronzes at the Aberdeen National Opens at the weekend, two more members of the club also qualified for the forthcoming British Championships.

Caley Stobo from Lossiemouth and Emma Marandola from Buckie both hit high technical scores which qualify them for next month’s event in Sheffield. They will be joining team-mates Shelby Simmers, Vivienne Boyd and Ruby Boyd to fly the flag for Moray at the British Championships.

Sisters Ruby and Vivienne took gold and silver respectively in the level 6 event in Aberdeen, both scoring personal best scores with a wide range of double jumps, combinations and spins in a field of 19 skaters from all over the UK. Team-mate Caley Stobo narrowly missed out on bronze but also hit her highest ever score and her ticket to the British Championships.

Ruby is a member of the British team and has been selected to represent GB at a major forthcoming international event in Latvia next month. David Anderson from Mosstowie won his second national gold in a row in the beginner men’s competition, whilst Elise Green took silver in the level 5 ladies against 22 girls from around the UK. This follows Elise’s recent gold medal at a major national event in Sheffield last month.

The skaters are all trained by brother and sister Sue Summers-Farrell and Graeme Summers. The coaches said, ‘The club’s skaters are doing brilliantly, winning medals at major national events all over the UK.

“Now we have five skaters at the forthcoming British championships, which is more than many large cities, plus a skater selected to represent GB. Moray certainly punches well above its weight on the national stage and we’re also always on the lookout for new members wanting to learn to skate, whether they’re looking towards competing or just wanting to skate for fun. We provide for recreational and fun skating as well as the competitive side.’

Moray Figure Skating Club prides itself on being a welcoming and inclusive club, providing skating tuition for all ages and abilities, raw beginners and leisure skaters as well as producing Scottish champions, members of the GB team, international medallists and sportMoray and sportScotland award-winners.

It has established itself as Moray’s top skating club and one of the most successful in the country. Members ages range from two years to older adults, with many families skating on the ice together practicing their skating skills.

The club’s popular learn-to-skate classes are held every Saturday from 10.45 to 1.15 at Moray Leisure Centre. Children and adults of all ages and abilities are welcome to come along, including raw beginners who haven’t skated before – and the first lesson is completely FREE. The club also provides its own free top-quality figure skate hire.

The classes place an accent on having fun in a friendly atmosphere while learning, and tuition is on hand from championship-level coaches and award-winning skaters. For further details call Lesley on 07771 576252, check out the club’s website at www.morayfigureskatingclub.co.uk or just turn up on the day. The club can be contacted by Email.

The club is also putting in a lot of hard work in preparation for its annual Christmas gala, featuring many top level skaters. Including a visit from Santa on skates, it promises to be great fun for all the family. Gala tickets will be on sale during club times in the MLC with effect from Saturday, October 28.