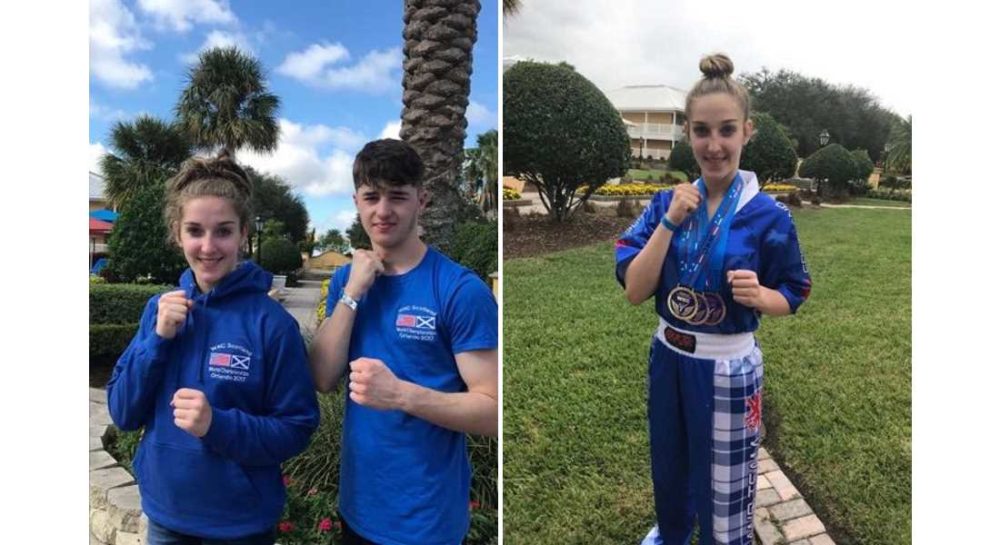 TWO MORAY KICKBOXERS have returned from Florida after successfully representing Scotland at the WKC World Championships.

Elgin Academy pupil Adele Williamson, 13, was joined in the United States by Lossiemouth’s Dylan Banfield, 15 – and between them the pair returned with four medals – a gold, silver and two bronze.

The young Kickboxing pair had gained immense experience after earning the opportunity to compete at the highest level in their sport – both train at the Kaizen Kickboxing in Elgin.

A spokeswoman for the club said: “They have had a very busy year competing in many of the UK’s top competitions to which they gained their place in the Scotland Team.

“Both also represented Great Britain successfully at the Junior European Championships in September, with Adele earning a silver in her individual category and a bronze in the team event. Dylan also achieved a podium finish earning a bronze medal in his light contact division.”

At the world championships in Florida the standard was naturally much higher than they had previously experienced with the England, the USA and Canadian teams particularly strong.

The spokeswoman added: “That did not stop Adele and Dylan earning their spots on the podium once again. Adele claiming a silver in Light Contact and a Bronze in her points division.

“Dylan earned a bronze in Light contact – and to top the week off Adele was selected for the Scotland Girls team event which was made up with three girls who all fought hard to reach the final.

“Up against the England girls team in the final, both teams were aiming for the top spot – but it was the Scottish Girls who did enough to secure the top podium spot and crowned World Champions.”