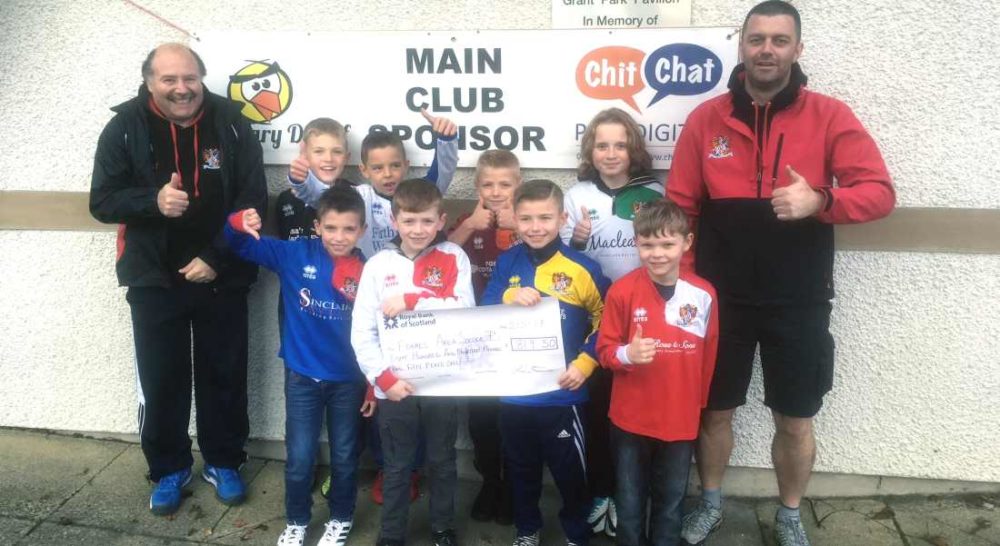 A GROUP OF FUTURE soccer stars have scored large for their own club by raising over £800 for the cause.

The ten boys playing for the Forres Area Soccer 7s earned the funding by taking part in Buckie It’s A Knockout – and this week they handed cheque to the Club for £819.50.

The youngsters, who all attend Applegrove Primary School in the Moray town, had to take on numerous challenges during the event and asked family and friends to sponsor them.

Oscar Dawson who took part said: “It was great fun and all my friends were doing it so I thought I would get involved too. There were lots of different races, and a lot of it involved teamwork.”

Another participant was Victor Stoczkowski, who added: “It was good to raise the money for Soccer 7s. We all play for the Club. My favourite event on the day was having to play giant table football, but we were the players in the table football.”

Mum Lindsay Black helped to get the youngsters involved: “This is the first year that you have been able to pick your own charity at the It’s A Knockout event. My son Jake wanted to take part so we got a team together and we realised that they all had Soccer 7s in common – so it made sense to raise the money for that.”

Graeme Ferguson, chairman of the Club that meets every Sunday between February and October, said he was impressed with the boys: “What these boys have done has encompassed just what soccer 7s is about, teamwork and having fun. We are blown away with the amount of money they have raised and the hard work they have put in and we offer them and everyone who sponsored them a huge thank you.”

Registration for the 2018 season of Forres Area Soccer 7s is now open to youngsters aged between four and 12 years old who can play for the Club – which next year will be celebrating its 25th birthday.

Forres Area Soccer 7s is open to girls and boys of all abilities. There are three levels the children can progress through – Development 4s (Super 5s and Soccer 7s.