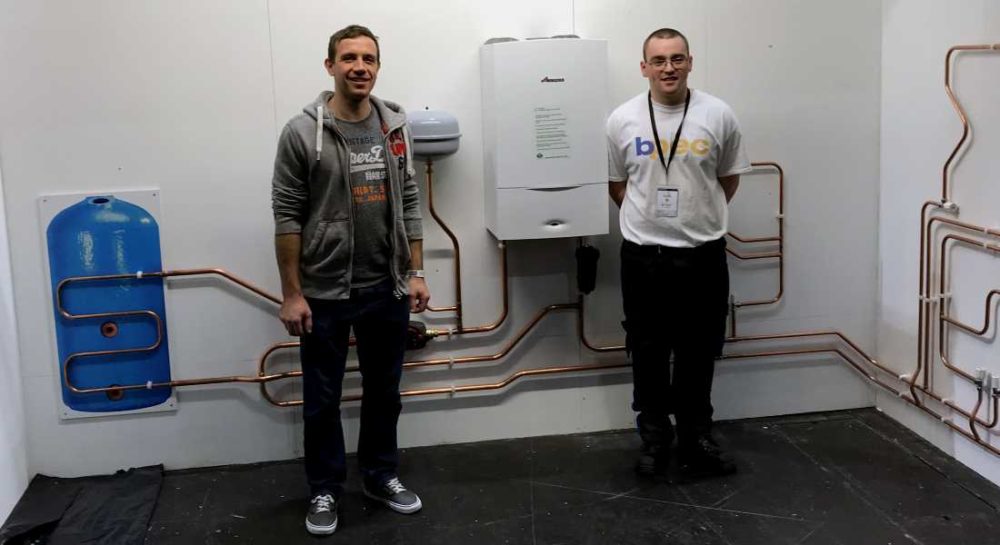 APPRENTICE PLUMBERS STUDYING at Moray College UHI have been taking part in the UK Finals at the ‘Skills Show’ in the NEC Birmingham.

Russell Scott and Matthew Blance had fought their way to Birmingham through regional heats, Russell winning the Scottish title and Matthew through the North East England heat.

Competitors from across the UK were put through their paces in a three day exercise to test their skills with a complex copper pipework model which replicated a working central heating system. The Skills Show is an annual event which brings together talents from all across industry sectors aimed at highlighting career opportunities for young people with the individual skill competitions at the heart of the show.

With over 40,000 visitors to the competition there was a lot of pressure on all competitors from across the UK – but it is was an opportunity to showcase skills to a massive audience.

On day three of the competition the winners were announced – and Russell, who is employed at Mark Hay Plumbing & Heating, was awarded a silver medal along with the opportunity to enter the selection process for the UK squad at the 2019 World Skills competition in Kazan, Russia.

Jim Mackinnon, Curriculum Leader for the SVQ in Plumbing, Moray College UHI said: “This is a fantastic achievement for Russell, backed up by a great performance from Matthew, and the plumbing team at the college are proud of the achievements from both young men.”