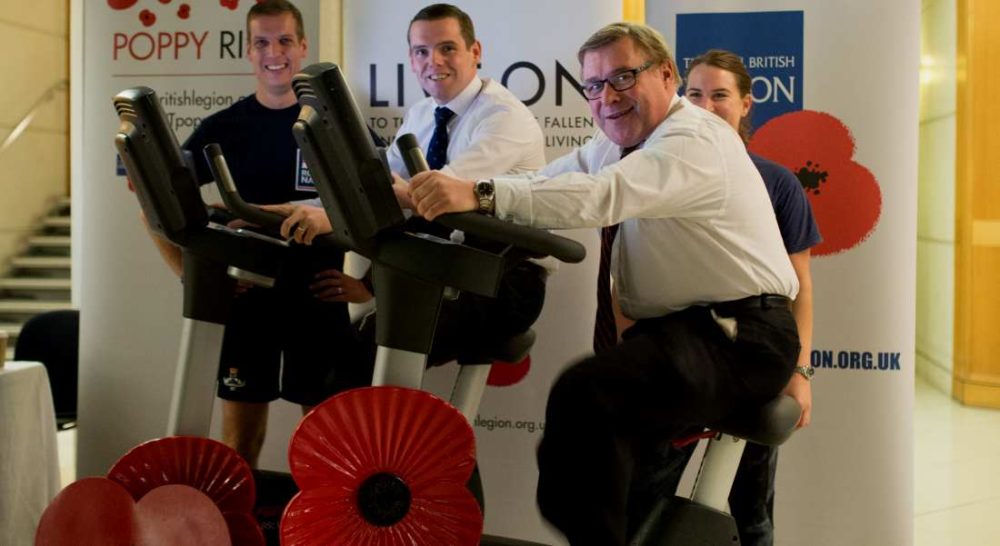 DOUGLAS ROSS MP has been putting in more pedal-power ahead of Remembrance Sunday – all for the cause of the Royal British Legion’s annual appeal.

Mr Ross will be attending Remembrance Day services in Moray in his official capacity as the region’s MP for the first time – a duty he is particularly proud to undertake.

He was, however, taking part in a more strenuous effort to fundraise by taking part in the ‘Poppy Ride’ in the surrounds of the Houses of Parliament to help raise awareness for the annual Poppy Appeal.

He said: “Remembrance Sunday is a time when we all come together and remember those who have paid the ultimate sacrifice, but the Poppy Ride helps raise funds for those members of the Armed Forces community who still need our support. It is a very worthwhile cause and something I was delighted to be a part of.”

The competitive situation is one that the MP is very much at home with, saying: “It was a bit of a challenge as I was racing against other MPs and military service personnel – but all that training around the Moray countryside must have paid off, as I covered 3.5km in the five minutes allowed.”

That was nearer the top of the leader board for MPs in the UK – and also top of the pile amongst the Scottish Conservative MPs.

Mr Ross was in good company as he raced against the Director General of the Royal British Legion – and serving members of the Armed Forces, all part of a 12-hour bike ride in Portcullis House.

Nick Maher CEO of the IPT said: “The work of The Royal British Legion is essential to the lives of the whole Armed Forces community across the UK and I am delighted that MPs and Peers are supporting us in our efforts to raise money for such a worthwhile cause.

“The support and enthusiasm from parliamentarians and service men and women has been fantastic.”