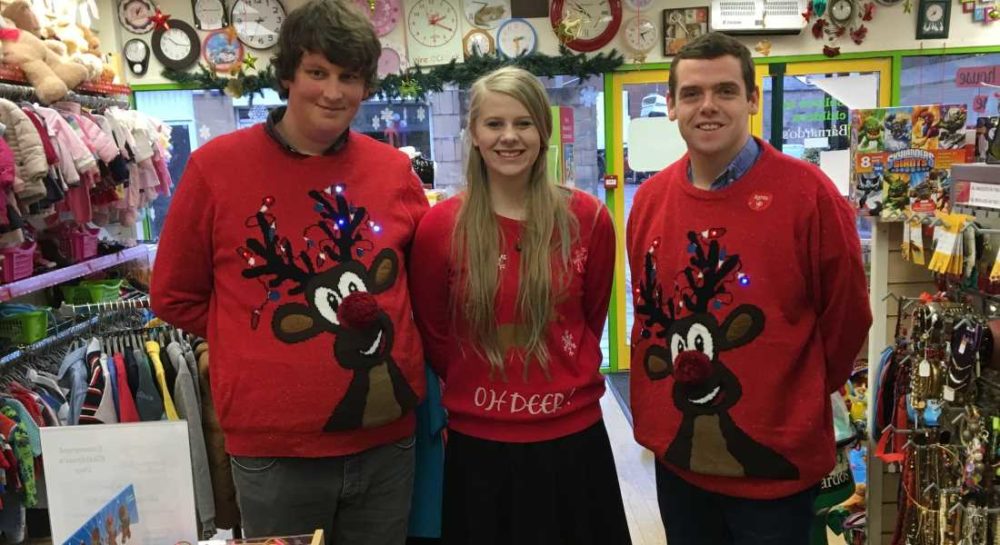 EVEN MP’S CAN GET caught up in Festive Goodwill – as demonstrated this week by Douglas Ross, who took time out in his constituency by volunteering at a local charity shop.

Enjoying his first Christmas since being elected back in May, Douglas rolled up at Barnardo’s on Elgin’s High Street.

It was the second successive year that he had worked with Barnardo’s voluntary staff as he took part in the charity’s engagement with local politicians.

“It was great fun although I’m not sure if the staff would take me on full time, but I did put some sales through the tills which is what it’s all about,” the MP said. He continued: “It’s also really useful to see at first hand the effort and commitment the staff and volunteers put in on a daily basis.

“There is a great atmosphere in the Elgin shop and you can see this rubs off on the customers as they come through the doors. “If you are about to start your Christmas shopping, then think about popping into your local charity shop where there are a range of festive gifts and cards on offer and hopefully shoppers haven’t been put off by the sight of me in a Christmas jumper.”

Deborah Barnham who is Retail Recruitment Manager with the charity said she was delighted that Douglas had given up his time, entering into the spirit of the Elgin shop who will be wearing a festive jumper every day up until Christmas.

She said volunteers are a vital part of the organisation’s make-up, adding: “The team in Elgin include volunteers who are there every day to those who are there for an hour or two, they are such an amazing team with inspirational stories and everyone working for a common aim of ‘believing in children”.

“All the money raised goes to help the UK’s most vulnerable young people, which totalled more than 280,000 last year. So, whether it’s donating stock, or shopping in the store, or volunteering your time, any contribution people can give is hugely appreciated.”