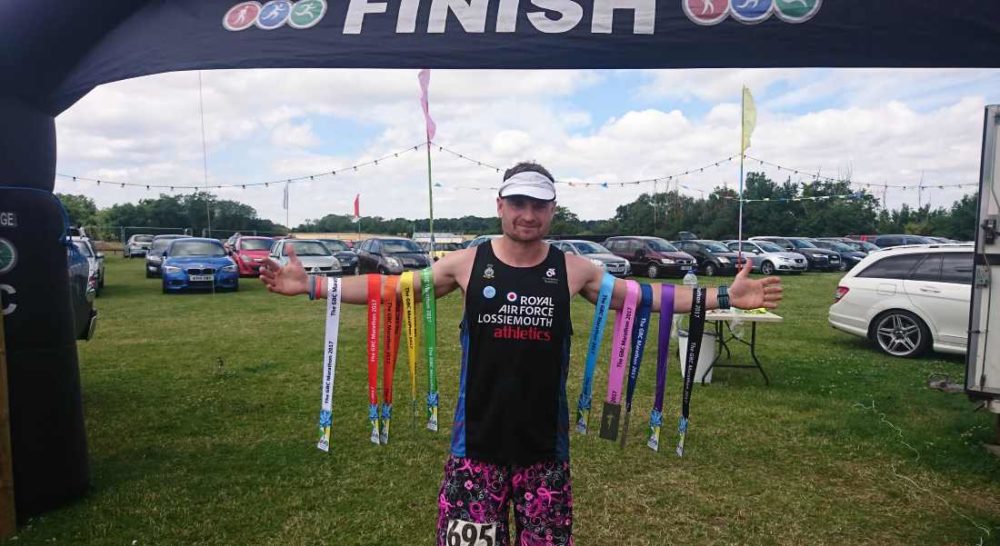 THE MORAY AIRMAN who has determined to complete 100 marathons in the year leading up to the RAF’s 100th Anniversary is counting down to the final 17.

Corporal Jon Ward, however, has a busy end to 2017 as he plans to run 13 marathons between November 18 and December 3.

And not trying to make things easy for himself Jon will run 11 marathons in 11 consecutive days from November 23! By the end of the year Jon will then have just five marathons to run to reach his 100th.

He won’t run any marathons in March next year as he prepares for his one hundredth, when he hopes to finish in a personal best time.

Jon said: “I ran my first marathon in 4 hours 56 minutes and gradually over the next 82 I’ve managed to get my personal best down to 3 hours and 1 minute.

“I have run in some amazing places – my 50th marathon was in St Lucia in the Caribbean where I ran seven in seven days in six different countries. Also, I’ve run the original marathon route in Greece – that was great, the route went from the town of Marathon to the Olympic stadium in Athens, and with a crowd cheering me on as I ran in to the ancient stadium it was an amazing feeling.

“I’ve recently joined Moray Road Runners, so I’m hoping training with them, and taking a few weeks off from running full marathons, will help me beat my personal best at the RAF100 Challenge event on April 1 next year.

“I will be taking it a little easier over Christmas as well, but I’ll be keeping myself ready for the five marathons in 2018 and especially the final one that will get me into the 100 marathon club.”

John ran his personal best time whilst on Exercise with 1(Fighter) Squadron in the USA earlier this year. As a logistician it was Jon’s responsibility to ensure the correct supplies and equipment were available to personnel during the exercise – but he was able to take in another marathon when he had some spare time.

Jon is raising money for the RAF Benevolent Fund during his 100 marathon challenge, so far he has raised £1350.

Anyone that wants to support him can do so online at: https://www.justgiving.com/fundraising/Jon-Wardraf100challenge.