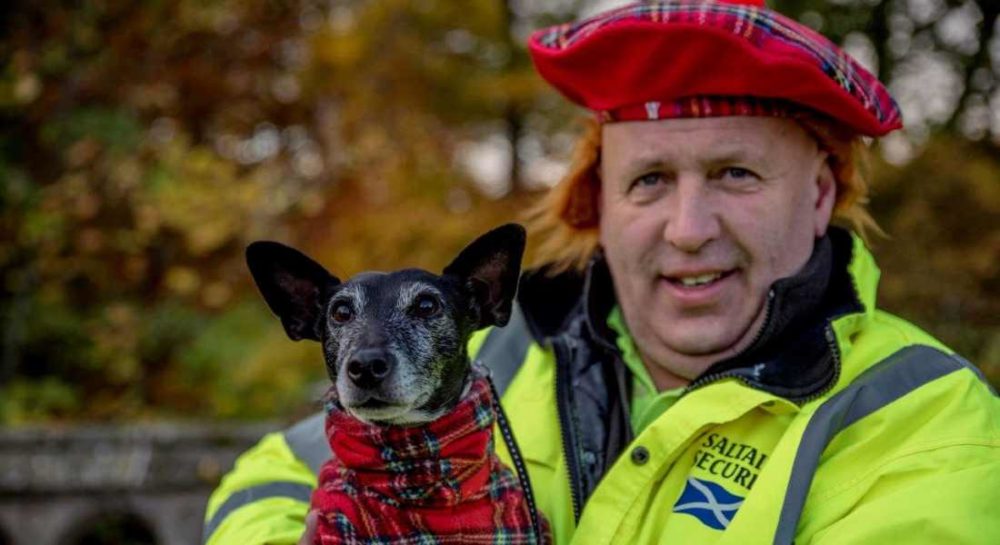 A MORAY SECURITY FIRM has unveiled a new division that contains more bark than bite – in an attempt to show that the industry needs to portray a more positive image.

Mrs Toynton’s K9 ClearCoats in Elgin commented that the security firm image was not helped by an image of “a dozen big, beefy security guards” on the Saltire social media page looked a bit harsh. So the pair talked through the issue and decided that they could work together – and show the ‘furry’ side of the security firm and perhaps change how they were perceived.

Brent told insideMORAY: “The perception of the industry remains somewhat negative – security companies need to look at the way they operate, to help bring about a step change and help achieve a more positive experience for people.

“We need to get away from all the stigma associated with ‘bouncers’ being on doors. Saltaire staff are not just Door Supervisors, they are trained in First Aid, Defribulation, Counter-Terrorism and they hold WorldHost status for customer service.

“We want people to attend our venues knowing they will be safe and secure and that any issues that arise will be dealt with positively and professionally.”

Mrs Toynton offered to invite 12 dogs along for a photo-shoot to snuggle up to the security staff – and show the world that their perceptions of those involved in the security industry were perhaps forgetful of the essential protection job they carry out.

Following the photoshoot Mrs Toynton said: “It was such fun – the guys at Saltaire were really friendly and although some were not that keen on dogs, by the end they didn’t want to give them back.
“It shows they have muscle, but muscle with a heart – I don’t think anybody will be able to look at the photographs and not smile.”

Brent concluded: “Our thanks to the Mansion House Hotel for helping with the shoot – it was great to see how three local companies could work together and bring a bit more fun to the community.”