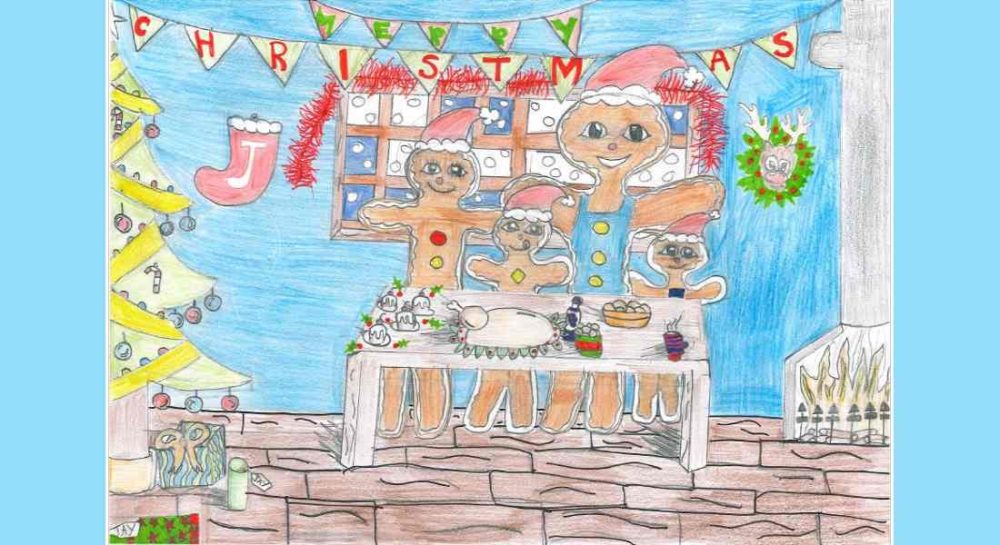 AN APPLEGROVE PRIMARY SCHOOL pupil in Forres will see his Christmas Card design in print after winning the annual competition for Richard Lochhead MSP’s official card.

Lewis Mackenzie, 11, produced the winning entry selected by Moray’s MSP for his charity card, which this year will raise funds for Alzheimer Scotland.

‘Family and Friends’ was the theme – and Lewis produced a fine drawing of a family of gingerbread people enjoying Christmas dinner in front of a roaring fire and decorated Christmas Tree.

Mr Lochhead presented Lewis with his prize at a school assembly before commenting: “I received a huge amount of entries this year from across Moray and it was an extremely difficult job in picking a winner due to the high standard of artwork. “However, a winner had to be picked and I am delighted with the picture that has been chosen. Congratulations to Lewis who is a worthy winner – his picture is bright, colourful and sums up the theme well.

“It was great to be able to surprise Lewis at the school assembly and announce that he had won. I got a tour of the school too and saw the recent refurbishment work that has been carried out.

“This year I have received fantastic support from local businesses who have sponsored the card to raise money for Alzheimer Scotland Moray. I am confident that we will be able to donate a large sum of money to the charity and know that it will benefit people with dementia, and their families, in Moray.”

Campbell Mair, Head of Operations at Alzheimer Scotland, added: “We are delighted that Richard Lochhead has recognised Alzheimer Scotland’s work across Moray by choosing the charity as the beneficiary from his Christmas Card this year.

“This support will provide an important contribution to helping Alzheimer Scotland get closer to achieving our aim – making sure that nobody faces dementia alone.”