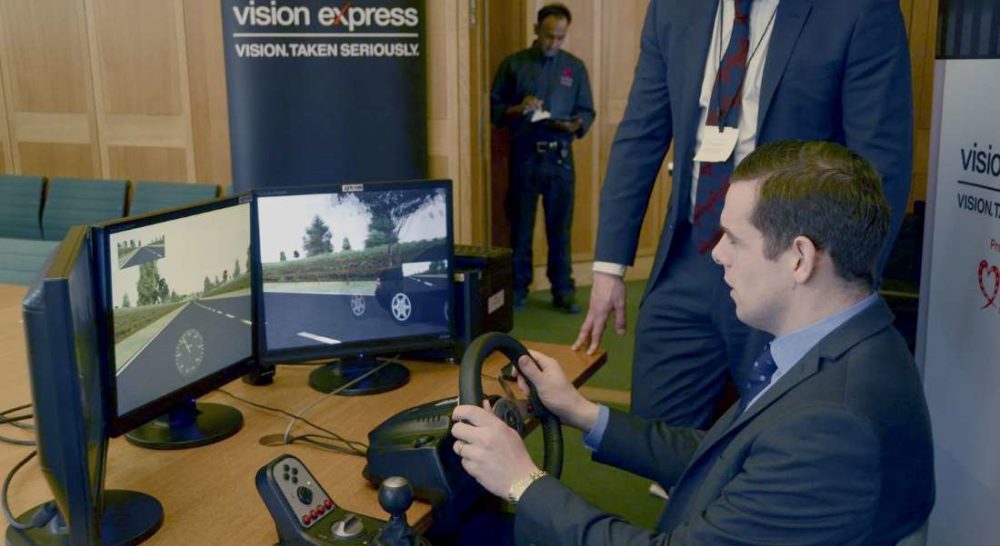 MOTORISTS IN MORAY are being urged to ensure that they take proper eye care measures after it was revealed almost 3000 road casualties each year are caused by drivers with poor vision.

A study by Vision Express and OnePoll discovered that 15% of drivers had not received an eye test since they passed their driving test – on average around 14 years earlier.

Recently Douglas Ross MP attended an event at Westminster where he was tested on a driving simulator that replicated the experience of driving with Glaucoma. The event was hosted by Vision Express and designed to help raise awareness about the importance of having regular eye tests.

Commenting the Moray MP said: “Many people don’t realise that changes in sight can be gradual, and experts say that it’s possible to lose up to 40% of your vision before even noticing it.

“That’s why drivers of all ages have a responsibility to themselves, their passengers, other road users and pedestrians to ensure they take their eye health seriously. Using the driving simulator, I experienced for myself just how debilitating and dangerous it can be to drive with impaired vision.

“I am encouraging the Government to do everything it can to spearhead ongoing driver awareness campaigns, using existing infrastructure and communications channels including websites and social media to reinforce and champion existing NHS guidance which recommends eye tests every two years. “It’s absolutely right that, to-date, Government efforts to improve road safety have focussed on speeding, drug and drink driving, driver fatigue and mobile phone use. However, the importance of eye health remains poorly understood – you wouldn’t get behind the wheel of your car if it didn’t have an up-to-date MOT, so why would you put your own life and the lives of others at risk by driving with defective eyesight?

“I’m pleased to say that the tests I took part in showed my eyesight is good so not only can I keep on driving but, despite what some football fans think, I’m still ok to referee and run the line!”

Jonathan Lawson, Vision Express CEO, added: “The Health & Safety Executive estimates that a third of all road traffic accidents involve someone who is at work, so ensuring these individuals have eye sight that is up to scratch can have a significant impact on improving road safety.

“The optometry industry does its best to keep this issue in the public eye but without more support from Government, it’s difficult to see how we’re going to really shift driver attitudes. That’s why Vision Express is calling on the Government to help us to raise awareness about the importance of regular eye tests for drivers.

“One simple step would be to ensure that when drivers are prompted to renew their photo card licence every ten years that they are also reminded about the importance of making sure their eye prescription is up-to-date.”