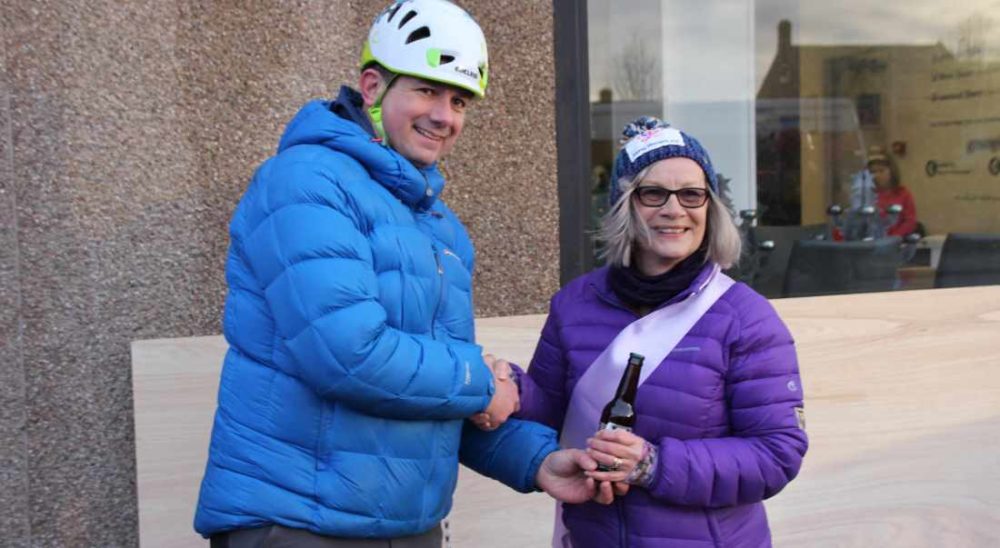 HUNDREDS TURNED OUT to lend their support to the under-threat outdoor pursuits charity Outfit Moray on Saturday – with many taking a leap of faith from the top of a tall building.

The first to accept the ‘Abseil Challenge’ was Jennifer Matheson from Moray Women’s Aid and an activist with the Moray WASPI campaign.

Speaking ahead of her first-ever abseil from the top of the Grampian Furnishers building in Lossiemouth, Jennifer said: “I was determined to support Outfit Moray because I have worked with disadvantaged young people for over 20 years in Moray, so I am well aware of them as an organisation – that they are super. However, I’m also here representing WASPI as an activist in the local Moray group.” Highlighting first the amazing job being done for young people by Outfit Moray, Jennifer added: “Over the years I’ve worked in predominately child protection, and sometimes what children need is a listening ear and adults that can get alongside them.

“It needs to be someone they trust and have experiences where they learn to trust and develop confidence and self-esteem. Outfit Moray is a super organisation – and in particular because they use the outdoors, that is always up there for children and is a good way to deal with stress or mental health issues.

“I have worked with children who have experience of Outfit Moray over the years and they really have got alongside those young people who are difficult to engage with. Their funding challenge is difficult and I think that the way the community has come out for this day in support of them is phenomenal.” Speaking of her desire that women should be given a fair transitional deal after having their pension dates pushed back twice and even three times in some instances, with little warning, Jennifer added: “Anything that we can do to raise their profile is important that that is why I’m wearing my WASPI sash for the abseil today.

“WASPI has had a boost this week with Douglas Ross supporting us in Westminster – we’ve also had news that the Parliamentary Ombudsman is now taking the WASPI cases very seriously, so it has been a really good week for us and I think that the profile is getting bigger.

“People are taking an interest now and understanding the plight of women pensioners and the unfair manner in which they were treated.” Karen Cox from Outfit Moray said the day had been “amazing” and a measure of the strength of feeling the public had for the charity.

She said: “We are very grateful for all the support we had throughout the day, including from several councillors who even had a go at the abseiling and of course our local MP, Douglas Ross and MSP, Richard Lochhead. We also enjoyed great support from such as Octovision Media, Windswept Brewery and of course Grampian Furnishers.”

“It was a fantastic opportunity to raise the profile of the event and some extra funding, but we still have some way to go to secure the future of Outfit Moray. People who wish to help can do so by donating direction via our BT Donations page.”