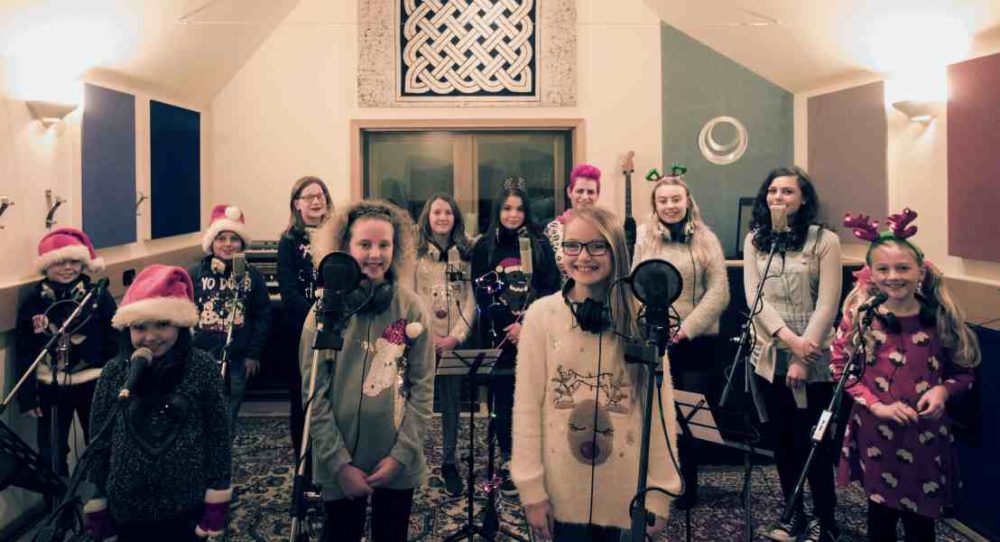 THE ANNUAL MORAY CHRISTMAS campaign from the Moray Economic Partnership is being officially launched today – and this year they have pulled out all the stops.

They will be creating a Moray version of the famous ‘Twelve Days of Christmas’ song – and have produced a video to be projected on St Giles Church in Elgin this evening.

The song has been customised to showcase famous Moray icons. It opens with Lucy Lyne, raised and educated in Forres, and a former title holder for the Highland region for Platinum Pageants Miss Year contest.

Now working as a beauty therapist in Forres and studying for a HNC in beauty therapy at Moray College, Lucy is depicted as the recipient of all the gifts from the ‘true love’ in the song.

The video closes on the twelfth day of Christmas, with twelve drummers drumming from Drumfun in Forres.

Heather’s Rising Stars from Forres sing the Twelve Days of Moray Christmas – children aged nine to 16 came together at Unity Recording Studio in Nairn to record the festive song.

Heather Hatch, founder of Rising Stars and singing teacher said: “We were delighted to be asked to get involved in the Twelve days of Moray Christmas campaign. The whole experience was very festive, we drove to the studio through the snow on a Friday night dressed in Christmas jumpers and full of the Christmas spirit. I don’t think any of the children will be able to sing the original lyrics to Twelve Days of Christmas again!”

John Cowe, Chair of Moray Economic Partnership, added: “We are really very proud of this Christmas campaign. Everybody had great fun putting this together and we are so grateful to all those that contributed and gave time, film footage or product for free.

“The Twelve Days of Moray Christmas really does capture the essence of Christmas in Moray. It celebrates our great heritage in food and drink with smoked salmon, shortbread and whisky – it features important sectors like construction and renewable energy.

“It showcases luxury items such as cashmere, highlights our fantastic golf courses and captures our stunning scenery and wildlife on camera with Spey Bay – and it shines a light on how creative we are here in Moray with Piping at Forres, Drumfun, Rising Stars and the burning of the Clavie.

“We hope that people enjoy watching it and we do beg a little forgiveness for creative license!”