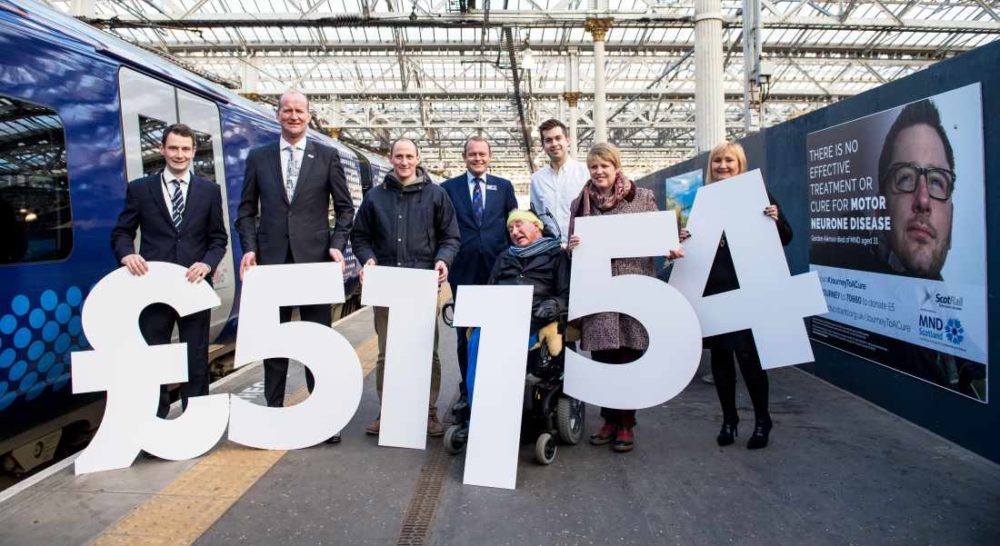 MORAY RAIL USERS have been helping the ScotRail Alliance to achieve it’s largest ever fundraising effort on behalf of MND Scotland.

Between April and October this year and with the help of staff and passengers from around the country over £51,000 has been raised – ahead of the target set for March next year.

Almost half of the total was raised by ScotRail Alliance staff, who took part in a wide range of fundraising events – including a sponsored skydive, walking over hot coals, and a staff football tournament.

When the partnership between the ScotRail Alliance and MND Scotland was announced in March, a target of raising £150,000 over three years was set. Collection tins have been placed at every station ticket office while station and on-train advertising spaces have been given to the charity free of charge.

To raise awareness of the disease, as well as MND Scotland’s work to find a cure, new advertising boards have been erected on the hoardings surrounding the site in Edinburgh Waverley where work is currently ongoing to build and extend platforms.

More money is expected to be raised next month, when a staff Christmas jumper day will be held in aid of the fight against motor neurone disease. ScotRail Alliance staff across the country are being encouraged to ‘do their bit in a festive knit’. Volunteers will be collecting donations from Moray passengers as they arrive or leave Inverness and Aberdeen.

ScotRail Alliance managing director Alex Hynes said: “MND Scotland is an absolutely fantastic organisation that is doing some great work to support motor neurone disease patients and their families, as well as working to find a cure.

“I’m exceptionally proud of how much we’ve managed to raise for MND Scotland in just seven short months. It’s important that we do all we can to raise awareness of this cruel disease, and keep up the fight for a cure.”