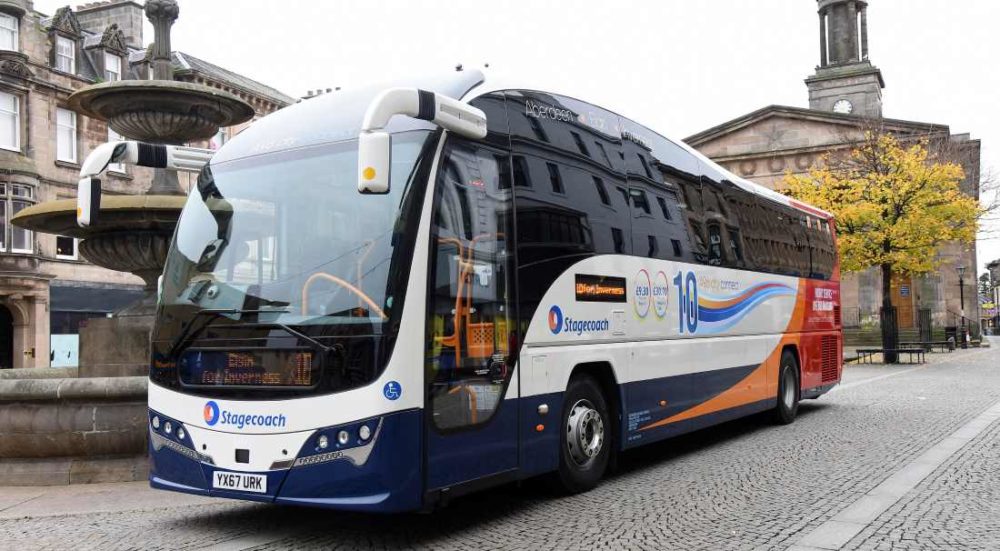 MORAY BUS PROVIDER STAGECOACH has launched a national campaign to show that travel on their coaches is better value than using a car.

Research carried out by the firm showed that people who use the bus to commute between Peterhead and Aberdeen are £2450 better of than those using their cars – with similar savings between Inverurie and Aberdeen.

The company also say that Moray commuters are also making savings through the use of the weekly ‘Megarider’ tickets – which can be used any time within the local area from as little as £11.20. The study showed that in North Scotland, bus travel costs are around 61% cheaper than the same commute by car, saving passengers an average of around £174 a month.

The widespread research covered 35 key commuter routes in England, Scotland and Wales. It compared the weekly price of hopping on the bus with the cost of fuel and car parking for the same journeys. It found there was an average annual saving of £1200 across all of the routes surveyed – enough to cover the entire annual energy costs for a three or four-bedroom house.

Mark Whitelocks, Managing Director of Stagecoach North Scotland said: “This research shows it can still be significantly cheaper to commute to work by bus rather than car for many people. The savings could go towards a family holiday, home improvements or more into the monthly shopping budget.

“We work hard to deliver high quality services for the many people who rely on the bus, and our current campaign demonstrates the great value, unlimited travel we offer through our weekly tickets.”

Stagecoach’s findings come as the latest Office of National Statistics research showed a 3% rise in the number of households that own a car or van between 2016 and 2017. However, research by campaign group Greener Journeys last year warned of the damaging impact of congestion within towns and cities across the UK. The research – by Professor David Begg – revealed that average traffic speeds in Britain’s busiest cities are set to fall to just 12mph by 2030 as traffic delays are expected to double over the next decade.

Mark Whitelocks added: “Unfortunately, along with other road users, our customers are being affected by the serious issue of traffic congestion which reduces the reliability of bus services, pushes up fares, reduces air quality and undermines the attractiveness of bus travel.

“We are investing in continued improvements for our customers but we need those responsible for road infrastructure to match that commitment by freeing up road space to let buses flourish.”

Stagecoach say they have made a series of investments to help transform bus travel for customers, including the Stagecoach Bus app which offers journey planning, real-time bus tracking, next stop information and mobile ticketing.

Stagecoach North Scotland has invested more than £10.5million in new vehicles for its operations over the past 3 years.