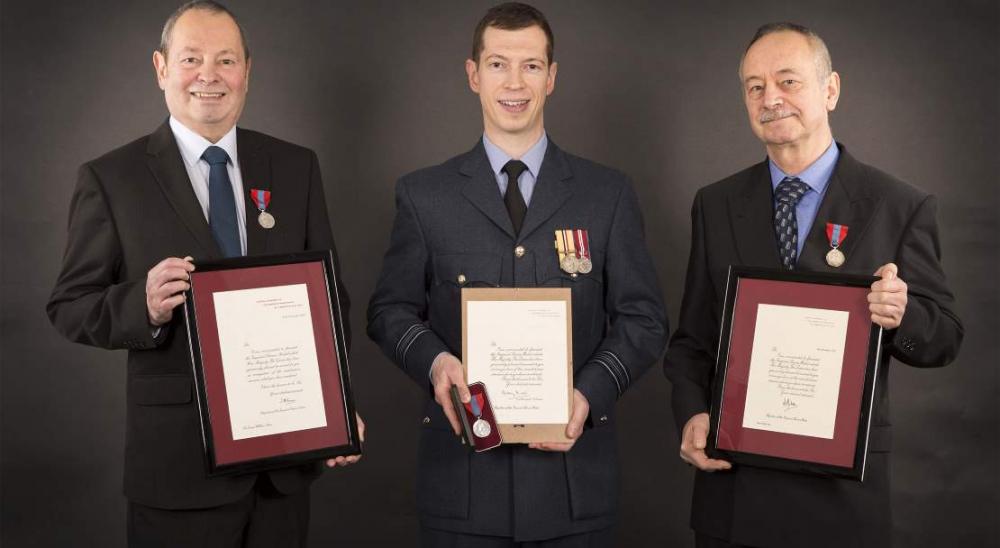 FORTY YEARS OF SERVICE to the Ministry of Defence has led to an Imperial Service Medal (ISM) being awarded at RAF Lossiemouth – the third member of the same family to receive the discretionary award.

Ewan Bain received the ISM at a recent honours and awards ceremony on the Moray base, where he had been one of six members of the same family to have either worked or are still working.

Having retired in 2016, Ewan had to be persuaded to return and receive his medal in person, matching his father and brother, Jimmy and James, who received the award in the 1990’s and 2010’s.

All three worked in the Mechanical Transport Section at RAF Lossiemouth. In attendance when Ewan was presented with his ISM was his son, Squadron Leader David Bain, an Engineering Officer currently serving at the base. David’s posting to RAF Lossiemouth ensured a third generation of the Bain family was working at the RAF Lossiemouth.

The family connection doesn’t end there – Ewan’s wife Frances worked in the Officers’ Mess for 17 years, and James’ wife Lorna is currently employed in the Physical Education Administration Office, having joined the Station Typing Pool in 1997.

Connections to the base were never far away – David has early memories of the Shackletons, Bucaneers, Jaguars and Hunters and of visiting the base with his dad and grandad. In 2004 he joined the RA, returning to his home town earlier this year to lead Command, Control, Communications, Computers & Intelligence Squadron.

Well liked and respected, both on camp and in the local community alike, this humble and unassuming family’s commitment and service to RAF Lossiemouth has been deservedly recognised.