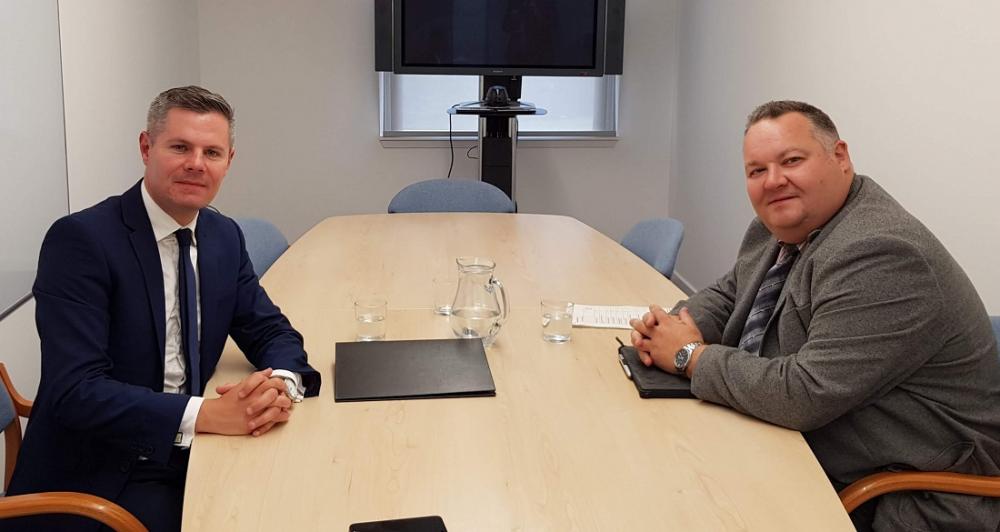 The new leader of the Moray Council has met with the Scottish Government Finance Secretary, Derek Mackay MSP, yesterday to discuss how they can work together to deliver for the people of Moray.

Councillor Graham Leadbitter, who is less than one week into his tenure as Leader of the Moray Council, met with Mr Mackay in Aberdeen for talks on some of the challenges facing the local authority, as well as the opportunities to invest in local communities to improve the lives of people in Moray.

Cllr Leadbitter said: “Moray has benefited from investment by the Scottish Government in local communities, with projects including new schools, flood schemes, affordable housing, and the rollout of superfast broadband. I am keen for the new SNP administration to build on what has already been achieved by working in partnership with the Scottish Government.”

Speaking after the meeting the Council Leader added: “I’m delighted that less than a week into the job I’ve been able to sit down with the Finance Secretary to look at how we can work together to deliver for communities throughout Moray.

“Whilst there are challenges facing the Council, there are also many opportunities and as Leader of the Council I have real ambition for the area and I want to work in partnership with Government Ministers to improve the lives of the people who live and work here.

“We had a positive meeting and it is clear that the Scottish Government is keen to build a strong relationship with the new administration of Moray Council, which can only benefit our local communities.”

Finance Secretary Derek Mackay MSP said: “It was great to meet the new Leader of Moray Council and discuss the challenges and opportunities facing the new Administration.

“There are many policy areas where we will work closely with Council colleagues to deliver for Moray including new schools and the expansion of early years education, and I look forward to seeing real progress.”