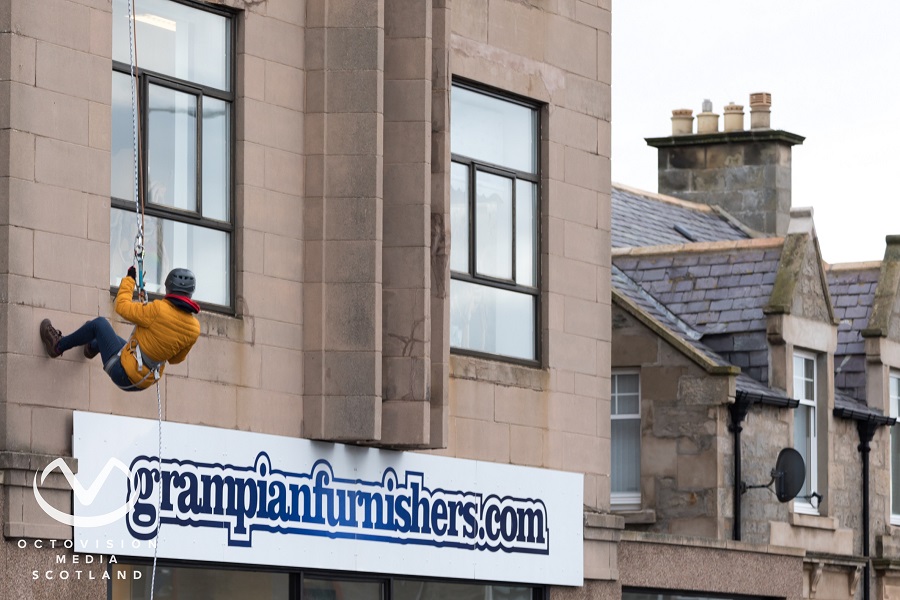 A charity fundraiser with a difference is being planned by local charity Outfit Moray.

The Seafest Abseil with Outfit Moray will take place on 7 July 2018 at Grampian Furnishers from 9am to 5pm, alongside the Seafest event which happens at Station Park in Lossiemouth.

Community Fundraiser, Karen Cox says: “Following on from the success of last year’s abseil in December, and thanks once again to the generous support of Royce Clarke of Grampian Furnishers, it was decided to hold another one, but this time as a thank you to the local community, for all the support we received during our emergency fundraising appeal. We are hoping this abseil gives lots of local charities, clubs, nurseries, schools and groups the opportunity to raise their own funds.  We know just how hard it is to find fun and exciting ways to raise funds and there’s nothing more exciting than an abseil!

“If you want to take part for the craic, spaces are £20 each, but if you are fundraising for any Moray based group or charity, there’s a 10% discount on the ticket price, meaning it’s just £18 a head.

“All charities, club, groups etc will have free rein over their fundraisers regarding sponsorship, they will receive promotion on Outfit Moray’s social media and be mentioned in any press release where feasible. There are only around 100 slots available; some of those will be set aside for those who don’t wish to fundraise and some are set aside for Outfit Moray’s use.

“Time slots will be allocated nearer the event, once we know how many spaces have been filled, but fundraising teams will be clubbed together, to provide their charity/group etc with maximum visibility, their individual media coverage and any desired branding. Charities will be responsible for sourcing their own fundraisers though!

“Of course, we are organising the event with the aim to raise our own much-needed funds, so as an enticement, anyone who wishes to raise sponsorship for Outfit Moray will be able to take part free of charge, on the promise they raise at least £20 in sponsorship for us,” Karen concludes.

Organised by the Lossiemouth Community Development Trust, Seafest brings the community of Lossiemouth together for a celebration of the town’s fishing heritage. First held in 2014, it has grown each year as new concepts and ideas have been introduced and is now a main event on Lossie’s calendar with Station Park filled with the best Lossie and Moray have to offer in the way of food and drinks, plus charities and demonstrations.

A video montage of last year’s abseil is available on https://youtu.be/2gYRXZk4ZxA